Our last chance to jag some stocking fillers and while there is no feature racing at Randwick it still looks a good betting card.

The Chris Waller trained Bigboyroy has finished second at four of his last six starts with some questioning his desire.

In the same week Port Louis gave the non-winner tag a nice push, Bigboyroy gets his chance to silence his critics.

Returning off a short break (63 days) he only went down narrowly when gunned down late behind Katalin.

Having only had the one soft trial he should have good improvement and a big tick with McDonald sticking aboard.

He will ride him a kilogram over but still looks very well treated down in the weights.

From the rails draw he looks to get every chance and with even luck he should prove hard to beat.

Have him marked inside 2-1 so the early price on offer is worth taking.

Not often I stick with one that McDonald doesn't but have to follow up on Welsh Legend.

Still can't believe she got beat last start when a narrow second behind Huetor.

She was only second up jumping from 1400m to 2000m and will have a better platform to produce a peak on Saturday.

She has placed in three of four attempts third up, including two of her three career wins.

From the inside draw she looks to land the one-one for new rider Jason Collet and while she too could be labelled a non-winner, she looks very hard to beat.

With McDonald off we are getting a fair twist in our favour, had he stuck I dare say she would be close to favourite.

Yes he's a loss but with each-way odds on offer – we have to stick. 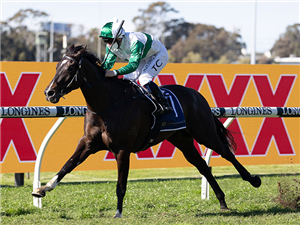