The rail was back in the true position and raced a Good 4. It was a terrific Canberra program highlighted by dominant wins by Pretty Woman in the Black Opal Preview and Outback Diva in the $150,000 Canberra Mile.

Training honours to Matt Dale with a double and a close second. It was also a good day for Edward Cummings, who got a $19 winner and two seconds, also at decent value. Blaike McDougall and Chad Lever both rode doubles.

Underground Music $6 presented in peak condition winning a lip from the favourite Tornac $3.20, with 2.6L back to Super Solar $5.50 in third.

Underground Music had placed here the previous meeting on a sticky track and rated up again on the good surface. Nisbet held the rail and let Tornac cross to lead a leisurely tempo — and the winner enjoyed the perfect trial from there. These two skipped away in the stretch and fought out a titanic battle, with a whisker in it on the line. Super Solar sat mid-field and was three-wide passing the 600m. He was positioned to win, but couldn't sprint with the other pair. The rest couldn't make ground. The race worked out nicely for the on-paces.

Blackhill Kitty $4.20 built on the first-up near-miss at Goulburn to take the race out after giving supporters a few heart flutters in sight of the post. Elusive Bride $26 was 1.5L away in second and Iliana $3.80 made third.

It was charge in front with three gallopers in a line passing the 600m. McDougall had Blackhill Kitty nicely positioned one off the fence behind them, and she turned five wide with clear air in front. With the leading trio beginning to feel the pain, she looked in for a comfortable win before being struck with the whip and running out abruptly — shifting significant ground. In a great piece of horsemanship McDougall got her going again and she came away. The filly is very new, but possesses good ability. She will be required to barrier trial satisfactorily before we see her again.

The debutant Elusive Birdie raced wide throughout and was well back on turning. She really motored to take second and is sure to appreciate racing over further. Iliana was slow off but also appreciated the pace being on. She sat midfield after being hustled along and kept coming beaten 2L. Just behind were Hallies Comet $16 and Old Man Emu $9, who been in the speed battle. The former was caught three wide all the way and the latter held the rail. Hallies Comet was resuming for the new yard (Dryden) and was ready. The barn would have been disappointed the way the race panned out.

Close To me $2.30F looked the bet of the day and duly won by a big space for the Snowden yard. Tycoon Tily was a clear second and there wasn't much between the next four headed by Missile Magic $16 and Wilful Soul $10.

Tycoon Tily showed great speed to find the lead from the wide gate. Close To Me used the rail to sit on the leaders back. The former held a clear lead at the 350m but Close To Me cruised up to her at the 200m and it was never in doubt after that. Tily worked early and it was a terrific effort to hold off the others. There was a line of them next with Missile Magic getting the bob for third.  He'd settled back and finished it off well coming down the middle with Wilful Soul. Manila Thriller $10 was next a lip away and the stewards queried Loy's ride in passing the 150m. He was told he must take runs if they presented themselves. The winner will go on and had plenty of these.

Only six went around but it turned out to be a spirited finish with the two clear market-elects Molly Nails $1,55F and Yaletown $3.4 engaged in a ding-dong battle to the line and finishing in that order well-clear of the others.

Molly Nails was second-up off a 7.5L Maiden win at Wagga and again showed she has a decent future. She was deep in-the-red throughout betting and was nicely positioned one-out one-back on settling. Yaletown led just a steady tempo. He kicked on turning, but Molly Nails got the nose in front at the 200m. Typical of a Waterhouse-Bott runner, Yaletown wouldn't be done with and fought like a tiger coming again on the line. It was a strong first-up effort. Linden Tree $31 was a well-beaten third and connections would have been pleased with his effort behind two good ones.

Like his long-priced (placed) stablemate in Race 2, we'd suggested Spanish Pearl $19 was a chance and he caused the upset — with the four best backed-runners finishing the slots behind her. She's been knocking on the door at the provincials and you'd have to say the win was deserved. She won by a length from Phearson $4, Zouflu $2.8F and Gateaux $3.80.

There was a bit of sorting out to do from the jump with Jack The Brumby $6 flying across from gate 14 and taking a clear lead passing the 1000m. He went quick and raced keenly and must have been 5L on front passing the 600m with three almost in Indian file chasing —Gateaux (charged with leading them up to him), Spanish Pearl and Zouflu. The leader hung out on turning and Gateaux took over with the race-fit Spanish Pearl coming down the centre. She went on to win from Phearson who was back, and three-or four wide the trip, and belted the line making up many lengths. Having only his second run, Phearson he's another nice prospect in the Matt Dale yard. The favoured next-placed pair were forced to race out of their comfort zone and will keep. Jack showed plenty of ticker to hold down (a well-beaten) fourth, but he's clearly an unfinished project.

It shaped as an even contest and that's how it transpired. In the end the market got it right with Ruthless Agent $5EF beating Mookareena $5EF by a half length with Ons Vier $11 and Onthetake $18 next.

Notably Invictus Prince $16 and Stephan $6 missed the start by miles and were never in contention after that.

Passing the 1000m there were three in a made dash for the front with two pairing off at the 800m and Onthetake electing to take the sit with the others chasing midfield and beyond. Mookareena was slow away and sat back. The leading pair turned in front but had cut at each other and were sitting ducks.  Onthetake was best placed, but Ruthless Agent emerged down the middle and got him. Mookareena had a wall in front of her but McDougall got the splits on the inside and she charged late to get second from Ons Vier, finishing on and showing better form after being three-wide all the way. Ruthless Agent was a firmer and built on the second-up Wagga placing. A terrific effort from Mookareena and she would have made it interesting if she'd jumped with them.

Pretty Woman $2.60 was a heavily-bet and proved much too good for the babies winning by 1.72L in slick time.

She'd impressed winning the Maiden stylishly here on debut (sticky track), but today had to contend with competition from some of Sydney's leading yards. By far the best supported of those was Bruckner $3.60, but he had to settle for third beaten 5.63L. Glistening $13 made second, with the local Miss Ostend $8.5, 6L from the winner, in fourth. Queen Of Dubai drifted from $6 to $12 and faded-out from the speed.

It was bunched and busy early with Pretty Woman holding the rail from the low gate with Queen Of Dubai outside her. Glistening got the box-seat all the way, with Bruckner next, but three wide. Pretty Woman skipped away on turning with Glistening emerging and looking the only danger. The winner never looked like stopping and it was a dominant win.

By Written Tycoon, Pretty Woman will now go onto the rich Black Opal Stakes and Matt Dale's filly looks the best local chance in many years to win the money. There was plenty to like too about Glistening's determined debut.

Bruckner (also on debut) didn't have the best of it but was well beaten, and Miss Ostend finished the race off well and has a future in the right company. VAAROOM $8 wound up in fifth place and rider McDougall said his mount was unsuited by a fast pace and would benefit from further race experience and be better over more ground.

The winner Outback Diva $4.20 was a firmer and clearly the best-bet starting a clear second-favourite behind Canasta $2.50, who got every chance in front but failed to respond to riding when pressured in the stretch beaten 5L. Entente $9 (a big drifter) placed second beaten 2L, with Maid Of Ore $17 a whisker away next.

At a steady gallop Maid of Ore sat outside the leader. Outback Diva settled midfield the rail with Entente on her outside. Outback Diva was positioned one of the wider runners on turning and sprinted quickly to tackle Maid Of Ore with Entente on her inside. The More Than Ready mare put a gap on them and was full of running on the line. She relished the mile and can go on to better things. Maid Of Ore was having her first run back and it was a terrific effort. The quality mare looks in for an excellent campaign. A good run the fourth horse Golly I'm Lucky $17. Upper House's run was much better that the fifth placing suggests.

From the commencement of betting they only wanted one horse Favreau $1.85 but was a close thing in the end. He had a half head to spare on the line from Prompt Prodigy $6 with Kristalove $17 a whisker away third — and clear of the rest. Mirror Model $4.40 was held up a couple of times from the turn but did not run on thereafter.

Mirror Model led early but pulled and Kristalove crossed and took over and set a steady tempo with Prompt Prodigy getting a nice sit in fourth and Favreau settled fifth on the rail. That's where they were at approaching the turn. Kristalove led them up under hard riding with Prompt Prodigy coming and Favreau caught up behind. The latter finally got across heals and flew at the other pair just getting up on the line. He relished the lift to the mile and it was a big effort after being slow to begin and being held up until the 250m as outlined. 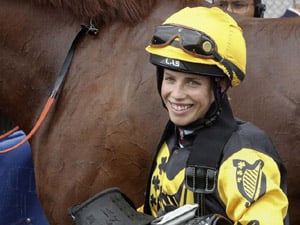