A Group One victory is top of mind for trainers Michael Moroney and Pam Gerard with talented three-year-old Harlech.

The Group Two winner put in a gallant performance last start to finish second behind star galloper Catalyst in the Gr.1 New Zealand 2000 Guineas (1600m) at Riccarton last month and his connections are keen to get an elite level victory before he heads across the Tasman.

Moroney is looking forward to eventually getting Harlech to Australia to not only chase the big money on offer but also boost his profile.

"He'll end up in Aussie, but at this stage he's going to stay in New Zealand for a while," Moroney said.

"He's been freshened since Riccarton and will run at Ellerslie on Boxing Day over 1400m then go down to Trentham for the Group One mile.

"Being a colt, we're concentrating on trying to win a Group One with him."

"After Trentham he will possibly stay on for the Karaka Million 3YO Classic (1600m)," Moroney said.

"He's nominated for the New Zealand Derby (Gr.1, 2400m), but we're not sure about that. He will probably be coming over here instead.

"It's most likely he would go up to Sydney, but there is the Australian Guineas (Gr.1, 1600m) here in Melbourne. We'll work that out when he gets here."

Harlech, a son of Darci Brahma, has won twice, including the Gr.2 James and Annie Sarten Memorial Stakes (1400m) at Te Rapa, and been placed three times from six starts.

"Each year we've been picking out a nice colt to leave in New Zealand to race early on," Moroney said. "The first year it was Arrogant and then last year it was Harlech. So far we've got it right."

"This year we left a filly for a change and she (Targhee) ran fourth at Ellerslie on Saturday," Moroney said.

He has earmarked the Gr.1 Barfoot & Thompson Auckland Cup (3200m) at Ellerslie on March 7 for the seven-year-old, with his lead-ups in Australia.

He is set to follow the same path as Vengeur Masque, who ran fifth in this year's edition of the Auckland Cup prior to finishing runner-up in the Gr.1 Sydney Cup (3200m).

"He will be going over for the Auckland Cup, all going well," Moroney said.

"I'll follow the same path we did with Vengeur Masque by running him in the Listed 2500m race (Torney Cup) at Moonee Valley three weeks before the Auckland Cup. Vengeur Masque won it before he went over.

"He has been freshened since the Sandown Cup and he's back into work at the end of this week."

Moroney said he has fought hoof problems with Sound, but rates him a "fair dinkum" stayer.

"He was luckless in the Tancred Stakes (Gr.1, 2400m). He should have run second. It was rider error on the day and in the Sydney Cup (Gr.1, 3200m) he was caught wide and ended up leading. He was still there at the top of the rise then weakened.

Moroney doesn't plan to transfer any other horses to his Matamata stable, though he has already sent over Born To Fight, a five-year-old son of Street Boss who had two wins and three placings in Australia and holds a nomination for the Dunstan Feeds 1500m Championship at Ellerslie on Boxing Day.

Born To Fight made his New Zealand debut at Waverley last month and finished an unlucky fourth in a Rating 72 1200m after being hampered mid-race. 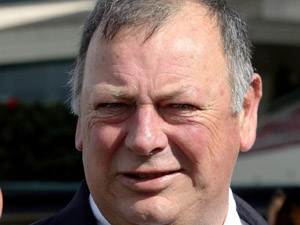