Handy early, he took over starting the back straight which is where Johnson stole the race by pushing him three clear at the 1300m, stretching out to six lengths at the 1000m.

The lead shrunk to four inside the 600m but he was going smoothly, Johnson sitting quietly at the top of the straight. Still up by three at the 200m he had them in trouble, still comfortably in front by a length and a quarter at the line.

Fiscal Fantasy sat a distant fifth (rails) from the 1400m, improved rounding the big turn and starting the run home kept to the fence.

She mounted a strong run along the inner, got to second at the 200m but could not catch the winner.

Masetto was a distant third at the 1000m, still third turning in and kept finding to the line for a solid third. Dolcetto was fourth at the 600m and in the straight kept going gamely to run fourth. 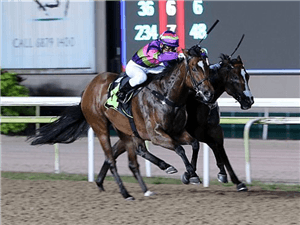