Although constituting just six runners, a top field assembled for the 3YO Group 1 and the only filly, Travelling Light, dealt to the boys somewhat comprehensively.

Caught after leading in the NZ One Thousand Guineas (Gr 1, 1600m) then fighting hard for third, this time she sat back and finished too well to record win five (third stakes) in just six starts.

She settled fifth (rails), three lengths from the pace past the 1200m, holding her position past the 800m.

Without losing ground she found herself last of the six rounding into the home straight, improved from the top of the straight, found room three off the fence then from the 200m sprinted quickly to challenge the leader.

Travelling too well, she ran past and was in no danger to the line, away by a length and quarter. Harlech sat third at the 1200m, held third rounding into the straight then took over at the 300m.

As soon as he slipped clear the winner made her run. He rallied but had no answer over the final 100m, having to settle for second.

Riodini made his run from the 600m, went up five deep turning in, looked flat at the 250m but found more to finish quite well for a distant third 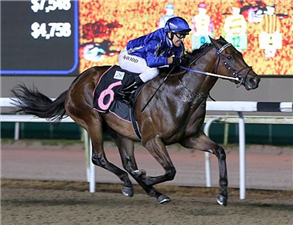