Singapore Racing - Weekend Review - Fame Star Back With A Bang

The John O'Hara trained Fame Star continued his meteoric rise on Saturday when notching up his sixth straight win.

One of the rising stars in Singapore, Fame Star began his winning streak back in August last year, taking out a Class 4 event over 1200m.

Rated 77+ by Timeform, he has raised the bar at every start since, now rated 101.

Fresh off a narrow win in the Group 2 EW Barker Trophy, Fame Star conceded a fitness edge and was forced to give weight away, but still proved too strong, leading throughout under Marc Lerner.

Jumping away evenly from the middle draw, Fame Star pressed on to take up the running, with the Michael Clements trained Eye Guy forcing the issue in second.

Travelling fairly well into the straight, Lerner cut him loose inside the 400m and while the response wasn't immediate, he really asserted his authority late.

The Lee Freedman trained Muraahib loomed up briefly to challenge, but couldn't get passed the bold front-runner, fading late to finish third.

River Radiance emerged from the pack late, pinching runs along the inside, but wasn't able to wear down Fame Star, finishing second.

Once again Fame Star showed his class and should have plenty of improvement to come, the question now is where do they go next.

The Group 1 Lion City Cup is the main target, though it's not until May 23.

"He was not really screwed down for today's race, but he's a very good horse. We'll see how he pulls up, he will improve from that first run," said assistant-trainer Stephen Crutchley.

"There is nothing for him. The Lion City Cup is his race, but I really don't know where to run him until then.

"I even thought of going up to 1400m and dropping him back. I'll have to go through the programme again."

Aramco won the Lion City Cup last year returning a Timeform rating of 109, a figure of 101 would have seen Fame Star finish third, marginally ahead of Mister Yeoh.

How much more improvement Fame Star can make remains to be seen, but Saturday's race should prove a great platform.

Worth noting Aramco was rated 104 prior to winning the Lion City Cup. 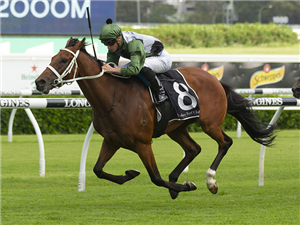