Coming off a double on Friday at Murray Bridge which included the cup winner Winning Partner, jockey Barend Vorster was quickly into stride when he rode Fox Hall to victory in the opening event of 1200 metres at Morphettville on Saturday.

Being under the care of Tony and Calvin McEvoy, Fox Hall  came from last with a strong run over the concluding stages.

History repeated itself when team McEvoy together with Barend Vorster  had an all the way-win with Star of Uma in the 1200 metre second race.

Darlamax  continued his good run at Morphettville when he brought up a hat-trick of wins in the 2028 metre third race.

Coming from the Pakenham stable of Andrew Homann and rated well by hoop Jason Holder Darlamax led all the way.

Jason Holder landed his second winner for the day when he rode Extra Time to victory in the 1200 metre fourth race.

Not qualifying for this event until last Saturday the Leon Macdonald and Andrew Gluyas trained Extra Time came from a midfield position to bring up win number two from ten starts.

After a lean period of late apprentice Jessica Eaton returned to the winner's list when she rode The Difference to victory in the 1200 metre fifth race.

Giving co-trainers Tony and Calvin McEvoy their third winner for the day The Difference led all the way and won comfortably.

After suffering an injury at last Friday's Murray Bridge Gold cup meeting jockey Dom Tourneur was back in business when he rode Li'l Hank to victory in the 1600 metre sixth race.

Being under the watchful eye of co-trainers Jemma Louise and Jordon Frew Li'l Hank came from a midfield position with a strong run over the concluding stages.

Jockey Anna Jordsjo resumed her relationship with Exalted Maxine when she led all the way to win the win the 1100 metre seventh race.  Jordsjo rode Exalted Maxine to her maiden win in 2018 as an apprentice.

The Grant Young trained mare led all the way to win the 1100 metre seventh race.

After breaking his maiden status two runs ago General Mint won his second race when he took out the 1100 metre eighth race.

Being under the care of little known Strathalbyn trainer Francis Smith and having the services of Jake Toeroek General Mint came with a strong run late in the event.

In a desperate finish Hearty Lass fought off the opposition in fine style when she won the 1200 metre final event.

Prepared by John Hyam and ridden vigorously by apprentice Caitlin Jones Hearty Lass came from a better than midfield position with Hyam saying afterwards, "she is likely to have her next race at Moonee Valley." 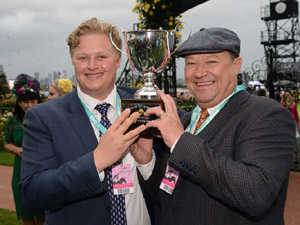