Keep an eye on: Coolangatta

Racing and Sports provides a horse to watch out of Saturday metropolitan racing on October 2.

One to keep an eye on from Saturday's Randwick meeting is two-year-old filly Coolangatta.

From the Maher and Eustace team, the daughter of Written Tycoon debuted a comprehensive favourite ($2.50) in the Gimcrack Stakes, after impressing in a dominant trial win on the 'Kenso' late last month.

Drawn an outside barrier (10), the filly was fast out of the gates but soon found herself in a bit of bother under the riding of James McDonald, as the pair were left posted three-wide-no-cover in the early goings.

Instead of looking to restrain his mount to find cover, McDonald remained on the wide run, knowing he had the best horse in the race.

Two lengths back when straightening, the two-year-old ambled up to join in at the 300m and when popped the question by McDonald swiftly kicked away from her challengers, charging to the line to score by 3.4L.

Visually impressive, the clock reassured the dominant performance as she finished in 56.78s on the Good 4 surface.

It looks as though Coolangatta won't have any concerns rising in distance, the market also agreeing, as she opened an early favourite for the Golden Slipper over 1200m (March 19).

While there is a lot to happen before the Slipper, she is a promising filly who is worth following as she will be winning again very soon. 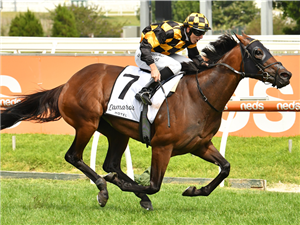