Danny Beasley took riding honours with a treble at the Kranji meeting at Singapore last Saturday.

Beasley struck twice early on the card but the best of his winning trio could be the progressive Red Ocean who took out the final event of the 12-race program.

Red Ocean impressed in his first outing for three months when he led and kicked right away to cruise home by 5.3L over 1400m.

It was the son of Ocean Park's third win from just seven outings and it was a performance that suggested he is ready to work through his grades this time in.

Red Ocean is trained by Shane Baertschiger and he teamed with Beasley for a winning double courtesy of first starter Just Because.

The son of Swiss Ace who had looked promising at the trials and showed good speed on race day, hitting the front a long way out to score by 1.3L over 1200m.

He was one of two debutant winners, the other being Mark Walker's High Water who took out the open maiden over 1000m.

The son of Rubick had shown speed at the trials but sat just behind the pace from the inside stall before taking over and fighting well for a narrow win.

Beasley's other winner was one of the more consistent performers on the card.

First Bowl was a 1.5L winner of the class 4 over 1200m, landing a fifth career victory and second in succession while also extending his current string of top-three finishes to six.

Sunday also secured back-to-back wins when he took out the class 5 over 1600m while Ricardo Le Grange was the other trainer to land a double courtesy of Superlative and Renzo.

Singapore races next on Sunday where the G1 Singapore Gold Cup is the main event. 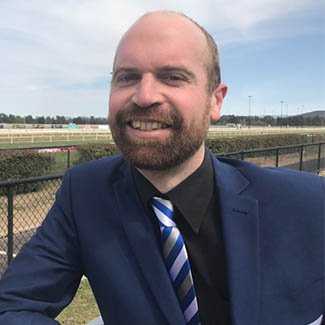