Flemington trainer Danny O’Brien made a rare trip to Adelaide and witnessed his charge Reflect the Stars take out the 2500 metre opening event at Morphettville on Saturday.

Ridden by Todd Pannell Reflect The Stars  came from a midfield position with a strong run over the concluding stages.

The success of the Richard and Chantelle Jolly stable continued when Alleboom  took out the 1050 metre second race.

Having Caitlin Jones as his rider Alleboom led throughout.

Manhattan Times brought up his second win in succession when he took out the 1200 metre third race.

Being under the care of Leon Macdonald and Andrew Gluyas and having the services of Todd Pannell, Manhattan Times came from last with a strong run late in the race.

Coming off a last start second on the Parks track Hinchpin  went one better when he took out the 1600 metre fourth race.

Being under the care of Tony and Calvin McEvoy and guided to victory by Barend Vorster Hinchpin came from a midfield position to bring up win number two from ten starts.

The newly formed training partnership at the start of the new season of Gordon Richards and Damien Moyle chalked up another win when Wheels of Courage won the 1200 metre fifth race.

Jockey Jason Holder kept up his good form when he landed his sew3cond winner for the afternoon when Start Status took out the 1800 metre sixth race.

Giving the training combination of Leon Macdonald and Andrew Gluyas their second winner Start Status was well placed throughout.

Trainer David Jolly was well pleased with his charge Howl winning his second race in the 1050 metre seventh event.

Partnered by Paul Gatt Howl came with a withering run from last to bring up his second win from three starts.

Coming off an eighth at Bendigo the Kayla Crowther guided Lombardo led all the way.

Jockey Kayla Crowther landed the second leg of a running double when she guided Point Blazer to victory in the 1200 metre final event.

Bought for $38,000 as a yearling the Shayne Cahill trained Point Blaze came from a worse than midfield position with a strong run late in the event. 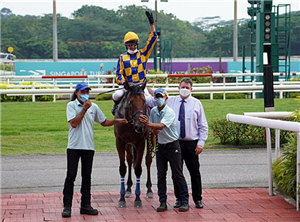