Midweek racing took place at Bendigo and Canterbury on Wednesday, and we’ve got a horse to follow from each meeting.

This was a dominant win first up as a gelding from the Lindsey Smith trained stayer, who went straight to the front and revelled in the heavy conditions to win by 3.5 lengths over 1500m. This is only the second preparation for the son of American Pharoah who did run fourth in the listed Geelong Classic last time in over 2200m, with Tulloch Stakes winner Character  finishing second there. The Lindsey Smith  stable is in red hot form, striking at 26% for their last 50 runners, including 8 winners from their last 17 runners. No doubt Lindsey will have picked out a race at the Warrnambool Carnival to target and with the form his stable is in, expect King Of Pharaohs to be ultra-competitive next start.

The winner, Resonater, looks very smart for the G Waterhouse & A Bott  stable but Political Debate was a very good run for second and looks a Coolmore colt who will relish a rise in trip next start. James Macdonald was hard at him around the bend and he took a while to wind up, but his last 200m was quite good to grab second and on breeding the 1200m will be far too short. By So You Think out of a Zabeel mare, he's got 2000m and beyond in his pedigree so rising in trip next time out on a bigger track can see Political Debate hard to beat next time out. 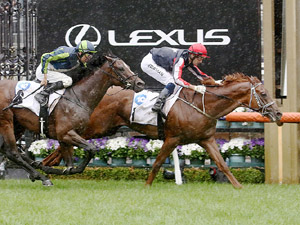