Daicos keen to get cracking with Pies

Collingwood will have six father-son recruits on their books for the 2022 AFL season after selecting Nick Daicos at pick four in Wednesday's national draft.

Collingwood father-son recruit Nick Daicos was denied his wish to be the No.1 AFL draft pick but doesn't feel he has any point to prove when he arrives at the club.

The Pies matched a bid from Gold Coast for the 18-year-old midfielder at pick four.

During the build-up, Daicos made no secret of his desire to be the top-ranked young player in the country.

He also raised eyebrows when he said in a radio interview it was "a bit interesting and a bit upsetting" that he had no pre-draft contact from GWS, who held pick two.

"It definitely wasn't my intention for it to come out that way," Daicos said.

"It has just been a childhood dream to go as high as I can.

"Tonight that was pick four, so it is awesome for me.

"I am super proud and I hope I have done my family and friends proud tonight."

Daicos will wear his father's famous No.35 jumper, which is now handed to Collingwood's top draft pick each year.

"I don't think I have a point to prove - I just want to play good footy," Daicos said.

"The boys who have taken before me are absolute superstars and I can't wait to see what they will do at the next level too."

Daicos will join five other father-son recruits on Collingwood's list next season: brother Josh, Callum and Tyler Brown, Darcy Moore and Will Kelly.

"It's a great tradition for the AFL, but I might be being a bit biased," Daicos said.

"There are a few Collingwood boys running around as father-sons. I think they have been pretty lucky with it all." 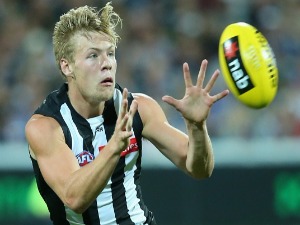