The first 2km time trial of pre-season was more of a concern for Gold Coast forward Ben King than the speculation over his AFL future.

Gold Coast forward Ben King lost more sleep over the start of pre-season than the intense speculation over his AFL future.

A return to Melbourne during the AFL trade period and a reunion with twin brother Max at St Kilda was widely accepted as the most likely destination for King.

The 19-year-old, however, put that talk to bed when he signed a contract extension with the Suns last month to tie him to the club until the end of the 2022 season.

King and most of his Suns' teammates began their pre-season with the traditional 2km time trial, just in time for temperatures on the Gold Coast to nudge towards 30C.

And while the teenager says the talk over a trade was easy to ignore, starting his second AFL pre-season was harder to put to the back of his mind.

"I'd say I'm probably more nervous before a two-k'er than I am before a game," he said.

"Last night didn't sleep too much but I'm glad it's over and get to train now."

After losing Jaeger O'Meara, Dion Prestia, Tom Lynch and Steven May since 2016, King's retention is the latest re-signing of the Suns' best young talent.

Fellow draftee Izak Rankine and youngsters Ben Ainsworth and Jack Bowes all signed extensions this year while dual premiership defender Brandon Ellis has been picked up from Richmond on a five-year deal.

Senior players David Swallow, Touk Miller and Sam Day were among those taking to the field in Monday's session despite it only being mandatory for the club's first to fourth-year players.

King said that commitment shows the excitement for the Suns' future isn't just limited to the club's younger stars.

"It's awesome seeing the older boys out there," he said. 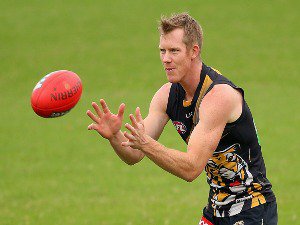