Fremantle forward Roxy Roux was impressive in her AFLW debut on Sunday, and coach Trent Cooper predicts she will become a star of the competition.

Star Fremantle draftee Roxanne Roux is on track to become the AFLW's newest cult hero, and West Coast are next in line to feel the brunt in Saturday's historic western derby.

Roux starred in her AFLW debut on Sunday, booting one goal to go with seven possessions and 16 hitouts in the 16-point win over Geelong.

Her crunching tackle in the second half revved up the 5509 crowd.

And in the final quarter, Roux unleashed a monster shot from outside 50m that faded late to register a behind.

Fremantle knew they had snared someone special when they took Roux with pick No.12 in last year's national draft.

Dockers coach Trent Cooper predicts the 170cm forward will become a star of the competition in the future.

And he is pleasantly surprised at how she has developed into a good back-up ruck.

"I remember saying to her colts coach, 'Don't put her in the ruck, she's never going to be a long-term ruck'," Cooper recalled.

"And here she is (performing well in the ruck).

"She's got that phenomenal leap. She can do anything. At the moment she's not a high possession player, but she's performing a great role for us.

"Five, six years down the track she's going to be a huge star of the competition."

Cooper expects Roux to play about 80 per cent up forward and 20 per cent in the ruck this season.

"She gave us real momentum in the second quarter when she was in there for a period," Cooper said.

"In the end Geelong decided not to compete against her in the ruck, which shows what sort of leap she's got."

A crowd of more than 30,000 is expected for the inaugural AFLW western derby at Optus Stadium.

West Coast will be aiming to bounce back from their 27-point loss to Collingwood on Sunday.

The Eagles booted just one goal in their AFLW debut, and are now sweating on the availability of Ashton Hill (knee). 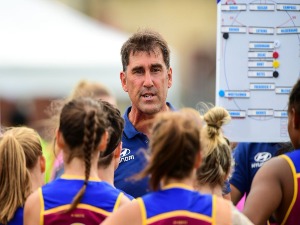