Collingwood midfielder Bri Davey faces a fitness test on Friday as she attempts to overcome a leg injury in time to face former club Carlton in round two.

Collingwood star Bri Davey remains "touch and go" for the crunch AFLW meeting with her former side Carlton because of a rare leg injury.

The midfield gun admitted she feared the worst when she hurt her left leg during the Magpies' round-one win over West Coast.

But medical assessment has revealed only soft tissue damage in Davey's shin, with no sign of a fracture.

It is a similar injury to one the former Matildas goalkeeper sustained to her right leg while playing soccer several years ago.

Davey said her condition had improved in recent days, but conceded the injury had confounded club medical staff.

"It's not a break or a fracture or anything like that, which I was pretty stoked about because that would've been a bit more of a knock to me," Davey said.

"It's more soft tissue damage in the shin and it's a very odd sort of injury. It's not common.

"I had it in the other shin and the fact I've done it twice is a bit weird, but these things tend to happen to me so I'm sort of used to it in a way."

Davey wore a compression bandage on her lower left leg when fronting the media on Thursday.

She faces a fitness test on Friday and would likely need more protection around the limb if cleared to play at Ikon Park on Sunday.

Davey is desperate to play against Carlton for the first time at AFLW level since her shock switch to the arch enemy was confirmed last April.

"There's always a little bit of banter on the field, so I would love to get up, but we'll see how we go." 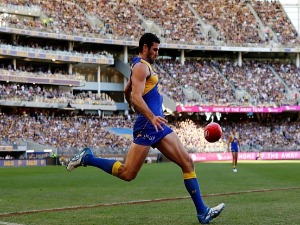