Sky is the limit for Roos' Garner in AFLW

North Melbourne have bounced back from a narrow opening-round loss with a convincing 18-point victory over Greater Western Sydney in Launceston.

Ominously for the rest of the AFLW, North Melbourne coach Scott Gowans reckons star Jasmine Garner can get even better.

Garner inspired the Kangaroos to a convincing 18-point victory over a wasteful Greater Western Sydney on Saturday afternoon in Launceston.

The 25-year-old vice-captain notched two goals and 19 disposals as her side bounced back in style from a close round-one loss to Melbourne.

Garner, who operated between the forwards and midfield, was outstanding in the first two quarters when she nabbed both of her goals.

"She's a special player. And I think she can get better as well," Gowans told reporters.

"Fitness-wise, she's come a long way and she's still got a bit to go with that.

"Her game education, she can run to better spots to get even more footy. She seems to rely on contesting the ball a lot still."

Skipper Emma Kearney and Jenna Bruton topped the disposals for North Melbourne with 20 each in a match Gowans had labelled a "must-win".

"It's a relief to get on the board. More so the way we played, our pressure was amazing," he said.

GWS squandered two easy majors in the second term, one from Haneen Zreika who missed from point-blank range on a run to the goal square.

"We don't give our forwards quick ball when we should and, at other times, when we should be going slow, we're trying to go fast," Giants coach Alan McConnell said.

"We've got that balance a bit out of whack, if you want to compare us to the best teams in the comp.

"You've got to take your chances and, right now, we're missing out."

The Kangaroos played the second half without forward Kaitlyn Ashmore, who failed a concussion test after a nasty head clash.

Tempers flared midway through the third quarter when North Melbourne's Brittany Gibson pushed over Brittany Tully at a stoppage.

Tully nailed the goal from the subsequent free kick to reduce the margin to 25-15.

But the Kangaroos rallied and kicked the game's final two goals to maintain their unbeaten record in Tasmania.

Giants skipper Alicia Eva was a constant presence and topped her side's possession count with a game-high 21. 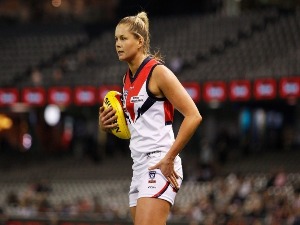