North Melbourne ruckman Todd Goldstein says looking after players' mental health will be crucial while the AFL competition is on hold.

AFL clubs face crucial decisions on what instructions to give their players and staff during the competition's shutdown period amid concerns over their mental health.

Club and league leaders are on Monday formulating plans to keep players fit and healthy while abiding by government restrictions relating to the coronavirus crisis, with the AFL season on hold until at least May 31.

The decision makers also face tough calls on cost-cutting measures in the face of huge losses in revenue.

North Melbourne ruckman Todd Goldstein said he and his teammates had been told to go home and wait for further instruction after Sunday's thrilling round-one win over St Kilda at Marvel Stadium.

Goldstein, who in recent years has spoken about his internal struggles, said mental health would have to be one of the key focuses in clubs' planning for the coming weeks.

"It's tough because you don't want everyone to be isolated too much because that's not overly great for anyone's mental health to be stuck with their own thoughts now," Goldstein told AAP.

"I think we'll do what's in the best interests of everyone and follow what we're allowed to do."

Goldstein, a father of three, said his personal priority now was to support his pregnant partner and keep his family safe and healthy.

The 31-year-old backed the AFL and Players' Association to provide the group of more than 1200 male and female players with the necessary information.

"My partner is pregnant and you obviously don't know what effects that (the virus) can have, so obviously there are concerns there," Goldstein said.

"But we get very, very good advice at the footy club and that definitely allays those fears, I think, and allays the panic."

The decision to shut down the AFL for 10 weeks came within an hour of the final siren of the Kangaroos' come-from-behind victory over the Saints.

Goldstein said the players had no idea about the impending decision during the match but word began to filter through after their post-match team meeting.

"In the end, we've got to do what's in the best interests of the whole nation and I think everyone's finding it tough at the moment, so we've all got to do what we can," he said. 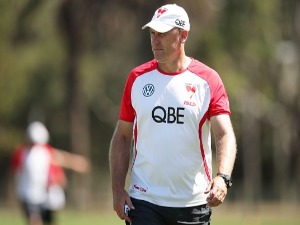