Hawthorn have held off a late rally by North Melbourne to scrap their way to a four-point AFL win at Marvel Stadium.

A frustrated Alastair Clarkson has made an impassioned plea to the AFL to help open up the game after Hawthorn's dour four-point win at Marvel Stadium.

The listless Kangaroos didn't score in Sunday evening's third quarter and didn't look like it as they trailed by a game-high 31 points in the final term.

It was this season's latest example of a close contest which was hard to watch for long stretches.

AFL chief executive Gillon McLachlan has urged coaches to play a more attractive, offensive style, but Hawks coach Clarkson believes a simple instruction to umpires to reward the tackler will do the trick.

"We had 69 tackles and I don't think we had a free kick from a tackle," Clarkson said.

"Sixty-nine tackles. And not one of them can be adjudicated holding the ball?

"What's happened to our game? You can't have that many tackles and not one of them be incorrect disposal. And you wonder why the game is an arm wrestle and that you can't get any open footy.

"Tonight's game ... if that's the spectacle that we're trying to search for in our game, then our game's in a dreadful space.

"But we can do a hell of a lot better by opening the game up a little bit and adjudicate some of those holding the balls, for both sides.

A lively three goal-performance by Chad Wingard looked set to ease the Hawks to a comfortable win before the the Roos sprang to life.

The margin was five points when Curtis Taylor sprayed his shot and Jy Simpkin's left-foot snap in traffic went the wrong side of the post for North fans with 19 seconds to go.

It was the last score of the night, allowing Hawthorn to scrape to a win which had looked well in their keeping.

Wingard's goal treble was the game high, while James Worpel, Liam Shiels and Tom Mitchell were important on the ball for Hawthorn.

With Ben Cunnington a late withdrawal with a back injury, Shaun Higgins, Jasper Pittard and Simpkin were all important.

"(We) clicked in the last quarter but I wasn't really pleased with that third quarter," Roos coach Rhyce Shaw said.

"We didn't really show our true brand of footy." 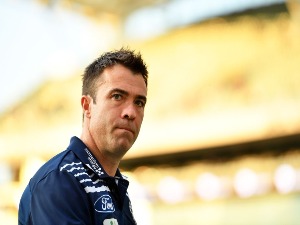