Adelaide's Walker out injured in AFL

Adelaide forward Taylor Walker will be sidelined for upto two AFL games because of a knee injury.

Adelaide forward Taylor Walker has been ruled out of AFL action for up to two weeks because of a knee injury.

The ex-skipper has struggled for form and managed just six disposals in a goal-less display in Adelaide's loss to Fremantle on Sunday.

Walker has been carrying a right knee complaint for more than a month, the Crows' head of medicine Steve Saunders says.

"With increased training intensity and stringing together a handful of games, he has become a little sore," Saunders said in a statement on Tuesday.

"This is affecting Taylor's agility and ability to jump at the ball.

"It's most likely we will have to rest Taylor for one to two weeks to make sure the issue is resolved."

Fellow key forward Darcy Fogarty (shoulder) is also expected to miss the next two games but goalsneak Tyson Stengle could return to AFL ranks after serving a club-imposed four-match ban for drink-driving.

The winless Crows suspended Stengle after he was caught by police in early April, but the four-game ban has only just expired.

Stengle looms as a probable replacement for fellow forward Lachlan Murphy, who has been offered a one-game ban from the AFL for a dangerous tackle on Fremantle's Adam Cerra.

"He is a bit shattered, Murph, that he has copped a week," Crows defender Brodie Smith told reporters on Tuesday.

"I thought it was a good tackle at the time.

"There have been a few (tackling) incidents where it's a bit hard to judge but we do have to protect the head, there have been guys knocked out in sling tackles and that sort of thing.

"But at the same time we still want that physicality." 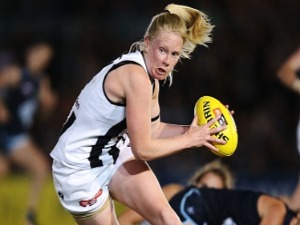