Brisbane coach Chris Fagan isn't too sure what he can do to prevent his players committing bumps similar to that which led to an AFL ban for Daniel McStay.

The Lions' big man will miss two matches after being sanctioned for a bump on Melbourne's Neville Jetta in last weekend's narrow win over the Demons.

McStay chose to bump and not tackle Jetta as the Demons ace had his head over the ball, with the Lions forward's hip collecting the Melbourne player.

While Fagan doesn't dispute his player deserved a ban, he also felt that McStay wasn't solely to blame for the incident.

"I think the other player contributed but that doesn't mean to say that he shouldn't have been suspended," Fagan said.

"We've just got to make it really clear to our players that they've got to do all that they can to avoid those sorts of collisions.

"Both the player who does the bump, but also hopefully the players who have the footy, that they don't sort of use their head in the manner that Neville did, which is just a technique thing, but it definitely contributed to the situation." 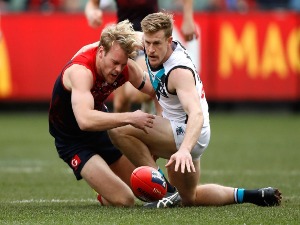