Parramatta have ruled Ryan Matterson out of Sunday's NRL clash with Canterbury despite the star second-rower passing all required concussion tests.

Parramatta will play it safe with star second-rower Ryan Matterson, ruling him out of Sunday's NRL match with Canterbury following last week's concussion.

Matterson passed all his health checks this week after copping a head knock against Wests Tigers.

But the high-flying Eels opted to side with caution considering the 25-year-old's history of concussions.

Marata Niukore will deputise on his edge.

"We won't be putting anyone at risk of playing if they aren't right," coach Brad Arthur said on Saturday morning.

"At the moment he has (passed all testing). It's just making sure he is good to go on the back of training."

The second-rower is said to be the only Eel unavailable for the traditional rivalry with the Bulldogs, as they play the long game with their season.

Players were given three days off after last week's win over the Tigers, ending a tough run of short turnarounds and battered and bruised bodies.

They are now steeling for another intense six-week stretch, before a last pre-finals rest between round 17 and 18.

"They bounced in on Monday and Tuesday and hopefully we will see the benefits of it tomorrow," Arthur said.

"We'd done a reasonable job where we could afford to put ourselves in that position where they could have those couple of days off.

"It's a bit of a reward for effort. That's the plan again in six weeks but we have to make sure we earn it."

Canterbury are desperate to avoid their worst start to a year through 12 rounds since 1964 on Sunday, in the NRL's return to ANZ Stadium.

And while the Eels are gunning for their best season opening since 1978, Arthur wants an immediate improvement in their starts.

While the Eels are the NRL's best second-half team this year, outscoring opponents 163-46, the first-half ledger reads 90-88.

They have also given up a combined five tries in the opening 20 of their past two games.

"Our start hasn't been good enough over the past three games," Arthur said.

* Canterbury have lost all eight games this year when not leading at halftime. 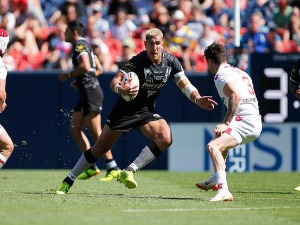