Melbourne thrashed North Melbourne by 57 points in their AFL game at Adelaide Oval to sit ninth on the premiership ladder.

Five days ago, Melbourne coach Simon Goodwin arrived in Adelaide with the proverbial wolves at his door.

His chairman had described his team as insipid; his team languished in 15th spot; his position as coach was in question.

But after two big Adelaide Oval wins - the latest a 57-point demolition of struggling North Melbourne on Sunday - Goodwin departs South Australia as coach of a revived club.

"We have got our season back into really good shape," Goodwin said.

"But now it's about us becoming even more mature and building our game further and improving as the year goes on.

"Hopefully we are putting ourselves in a position where we can start challenging some of the really good sides that are sitting up the top of the ladder."

The Kangaroos slip to 16th spot with their eighth loss in the past nine games.

But their coach Rhyce Shaw was in no mood for excuses.

"Our display tonight for the majority of the game wasn't acceptable, it's not up to a standard befitting of our football club," Shaw said.

"This is not what we're about as a footy club. I'm not going to sit here and try and spin it."

Melbourne rolled to victory with six goals to none in the last quarter - and they allowed the Kangas just two majors after quarter-time.

The Demons' midfield guns all fired: Christian Petracca and Angus Brayshaw both had 29 disposals and kicked a goal; Clayton Oliver's 31 possessions featured a goal - the latter pair had eight inside 50s each.

In stark contrast, North's attack centred solely on Nick Larkey - he booted four of his side's five goals, the other came from Daw in the second minute of the match. 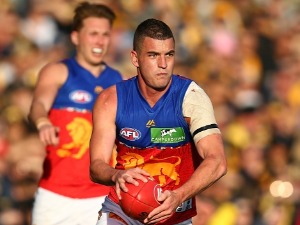