Essendon coach John Worsfold has backed Anthony McDonald-Tipungwuti to return to form as the Bombers attempt to find solutions to their injury-hit AFL forward line.

Joe Daniher's long-term absence has been compounded by injuries to Jake Stringer, Jayden Laverde (both syndesmosis) and Orazio Fantasia (calf) - while versatile defender Cale Hooker has swung forward with success in the past but has been sidelined with a calf strain.

Jacob Townsend added to that injury toll when he was concussed in Friday night's loss to GWS and will miss Wednesday's clash with Gold Coast.

McDonald-Tipungwuti has kicked just 10 goals in nine games but Worsfold said he had suffered the flow-on effects of an understrength forward line.

"He's not far off," Worsfold said.

"He's playing some pretty good footy for us and his pressure is as always a strong part of his game and it keeps the opposition on their toes.

"So what we're really working towards is having a forward line that really understands their roles and works really well together and we haven't had a lot of continuity with the guys playing alongside each other.

"So we've had to use Walla in a couple of different roles throughout the year to help out as we blooded a couple of young players like (Ned) Cahill but overall he's in good shape.

"He's going to continue to play his role and at some point maybe he'll end up with a bigger haul of goals but as long as the Essendon footy club end up with a good tally we'll be happy."

Worsfold expected Townsend to return against St Kilda on Sunday, while Jordan Ridley (ribs) finished the Giants clash on the bench but is set to face the Suns.

With two games in five days to come, Worsfold flagged making selection decisions for Wednesday "with one eye on the weekend."

Fantasia and Hooker could return from their respective calf injuries as early as Sunday's game but if not should face Richmond in round 13. 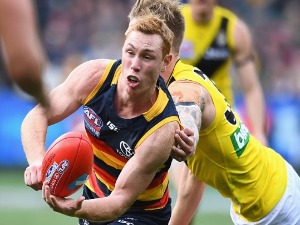