Richmond and Geelong will contest Saturday night's AFL season decider after knocking out the higher-ranked Port Adelaide and Brisbane in the preliminary finals.

The AFL grand final will either confirm a Richmond dynasty or deliver a Gary Ablett fairytale after the Tigers and Geelong forced their way into what will be the first all-Victorian season decider in nine years.

As irony would have it, the game will be played in Queensland, with the Gabba to host a historic night grand final.

Retiring champion Ablett produced a third-quarter cameo with two crucial goals as the Cats put a break on Brisbane in their preliminary final on Saturday night, ending the Lions' dream of playing a grand final on home soil.

The 40-point victory means the 36-year-old Ablett will get a crack at his third premiership before heading into the sunset.

While the focus will rightly be on the grand final combatants this week, the results have raised further questions over the effects of the hotly debated pre-finals-bye after the two qualifying final winners failed to reach the grand final.

Minor premiers Port Adelaide and second-ranked Brisbane both played just one match between the end of the shortened home-and-away season on September 21 and their preliminary finals - a period of almost four weeks.

Richmond and Geelong, on the other hand, appeared to enjoy the continuity of more regular outings.

In a telling statistic, six of 10 qualifying-final winners over the last five years have failed to reach the grand final, whereas only two missed out in the previous decade.

There is a direct correlation to the introduction of the pre-finals bye in 2016.

It was a thought that crossed the mind of beaten Lions coach Chris Fagan on Saturday night as he contemplated a long summer ahead.

"We've seen preliminary finals in past years where the team that won the first week and had the rest would overrun teams late, but maybe that (the pre-finals bye) has an effect," Fagan said.

"It's not an excuse for us losing tonight, we were comprehensively beaten, but I'm not sure that it was an advantage this year to win that first week.

"But we'll take the win, alright? We wanted to win a final and we were able to get a great win against Richmond (in the qualifying final) in another invaluable experience.

"But it's an interesting question. Maybe a scientist could answer it better than I, but I wondered about that."

For their part, Geelong got the preliminary-final monkey off their back - ending a run of four consecutive losses in the penultimate match of the season - and will get the chance to send off Ablett in style.

Port Adelaide and Brisbane have the basis of playing lists that can expect to challenge again next season, however, the Lions will seek to add some much-needed depth to their key position stocks when they pursue tall forward Joe Daniher. 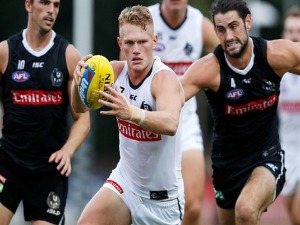