Two-time AFL premiership player Lewis Jetta has been delisted by West Coast after five seasons with the club.

West Coast have axed veteran defender Lewis Jetta in a move that likely spells the end of the dual premiership star's AFL career.

The 31-year-old former Sydney speedster managed only six matches in 2020 and fell out of favour after round four.

"Unfortunately we are not in a position to offer Lewis an opportunity beyond this year," West Coast football manager Craig Vozzo said.

"Lewis has been a highly valued member of our playing group for the last six years and will always be fondly remembered as a Chris Mainwaring medallist and a premiership player."

The Bombers also delisted Martin Gleeson and Dylan Clarke with the intention of re-signing them in the rookie draft. 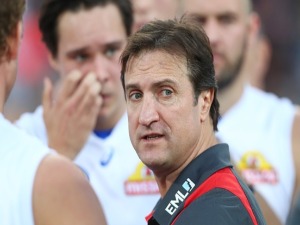