The heat is set to intensify on Gold Coast coach Stuart Dew after his team slumped to a 98-point loss to Melbourne at Marvel Stadium.

Luke Jackson and Ben Brown combined for eight goals as Melbourne regained their scoring mojo in a 98-point thrashing of hapless Gold Coast at Marvel Stadium.

The Demons entered Sunday's match with big question marks about their scoring potency after averaging just 69 points over their past six games.

Saturday's flight debacle - the Demons flew to Brisbane and spent two hours on the tarmac before flying straight back to Melbourne due to Queensland's snap lockdown - added another hurdle in the team's bid to return to form.

But any doubts were extinguished in emphatic fashion as the Demons unleashed a scoring masterclass on the way to a 18.20 (128) to 4.6 (30) victory.

Melbourne led 80-21 at half-time, with Jackson entering the long break with four goals to his name.

It was just the second time in 16 years Melbourne had reached 80 points in a first half - the other coming against Gold Coast in 2018.

Jackson, whose previous best return was two goals, finished the match with 4.0, 14 hitouts and 17 disposals after spending most of the second half in the ruck, while Brown booted 4.1 and took six marks in a lively display.

Demons midfielder Clayton Oliver boosted his Brownlow medal hopes with 35 disposals, 12 clearances and one goal while Christian Petracca also had a big day.

Since leading Brisbane by 27 points at half-time last week, Gold Coast have been outscored 215-41 in their last six quarters of football.

The Suns trailed Melbourne by just six points late in the first quarter after kicking three of the first seven goals of the match.

But their next goal didn't arrive until there was just a tick over four minutes remaining in the match.

The final inside 50m count (71-27) made for damning reading and the result heaps further pressure on Gold Coast coach Stuart Dew, who is contracted until the end of 2022.

Demons forward Tom McDonald was subbed off at three-quarter time with a sore back in the only real blemish for Melbourne.

The result ensures Melbourne will remain in the top four ahead of their round-21 match against West Coast in Perth. 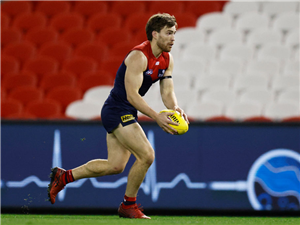