Snapshot of round four of the AFLW season

Snapshot of round four of the AFLW season as Fremantle and Collingwood maintained their perfect records in 2021.

A SNAPSHOT OF ROUND FOUR OF THE 2021 AFLW SEASON

THEY SAID IT: "The PG version would say, 'Please try harder'. We just didn't have our heads in the game in that first term for whatever reason ... we sat on our heels and let them do it." - Carlton coach Daniel Harford laughed after being asked what he said during a fearsome quarter-time spray to his players.

STATS THAT MATTER: Preseason flag fancies North Melbourne were held goalless and produced their lowest AFLW total - 0.8 (8) - as they suffered a second successive defeat, this time against red-hot Collingwood.

PLAYER OF THE ROUND: Adelaide superstar Erin Phillips became the first player in AFLW history to register at least 20 disposals and four goals in the same match as she led the Crows to an important win over Brisbane. Phillips finished with 4.0 and tallied 15 kicks, six handpasses, eight marks and four clearances.

KEY MOMENT: When reigning AFLW best-and-fairest Madison Prespakis spear-tackled Richmond's Sarah Hosking into the ground, not only did it put the star Blue at risk of being suspended by the match review officer, but it also forced Hosking to undergo a concussion test. Her absence from the field led to a dramatic momentum shift as Carlton piled on seven of the next nine goals.

TALKING POINT: The AFL's attempt to draw a big crowd by showcasing the North Melbourne-Collingwood fixture at Marvel Stadium didn't exactly pay off. Just 2254 fans turned out - well below the reduced capacity amid COVID-19 restrictions. Both teams enjoyed the perfect conditions and fast deck, but the game didn't have the same atmosphere as those played at traditional suburban grounds.

WHAT'S NEXT: Round five is Indigenous Round, and the hastily rearranged schedule (because of ongoing travel restrictions) will see Geelong and Richmond both vying for their first win of the season on Friday night. Fremantle-Brisbane and North Melbourne-Carlton are the pick of the Saturday games, while Collingwood-Melbourne should be a cracker at Victoria Park on Sunday. 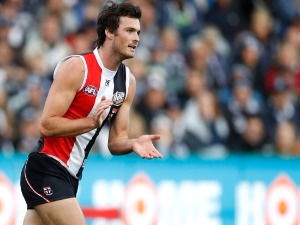