A snapshot of Nathan Buckley's career as a player and coach at AFL club Collingwood over the last three decades.

After winning the AFL Rising Star award in his one season with the Brisbane Bears in 1993, Buckley chose to join Collingwood ahead of North Melbourne. He was an instant hit, sharing the Magpies' best-and-fairest award with Gavin Brown in 1994.

With three Copeland trophies already under his belt, Buckley took over the captaincy from Brown ahead of the 1999 season. It was club great Tony Shaw's last as coach as new president Eddie McGuire helped lure Mick Malthouse to the Magpies.

Malthouse guided Collingwood to a grand final within three years and Buckley won the Norm Smith Medal in 2002 despite a nine-point defeat to Brisbane. The Magpies lost to the Lions in a second-straight season-decider a year later.

Buckley claimed his sixth Copeland Trophy in 2003 and finished in a three-way tie for the Brownlow Medal with Sydney's Adam Goodes and Adelaide's Mark Ricciuto. The trio finished level on 22 votes. Buckley's highest season tally was 24 votes in 1998, when he finished runner-up to St Kilda's Robert Harvey.

Somewhat inevitably, after retiring and spending two years in media roles, Buckley moved into coaching as Malthouse's assistant for 2010-11. The infamous coaching handover engineered by McGuire ultimately turned sour and Buckley took the reins in 2012, with Malthouse leaving and then joining arch-rivals Carlton a year later.

Buckley took Collingwood to finals in his first two years as coach but after four seasons without a September appearance, the senior coach was at the centre of a wide-ranging review of the Magpies' football department in 2017. He survived and the club made a raft of changes around him.

Buckley took a new approach to coaching and achieved instant results, leading Collingwood from the September wilderness to a shock grand final appearance in 2018. But after kicking the first five goals, the Magpies were beaten in gut-wrenching fashion as West Coast's Dom Sheed kicked the match-winning goal in the dying stages of the match.

Collingwood's humiliating exit from the 2020 finals fed into a tumultuous off-season. Botched list management decisions led to a trade period fire sale and the club's handling of the leaked Do Better report resulted in McGuire's resignation. The Magpies descended into "reset" mode early in 2021 and a decision to part ways with Buckley was made after a 3-9 start to the season. 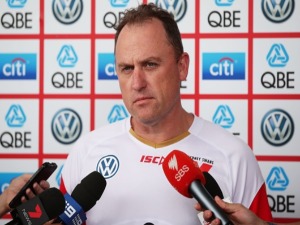