Greater Western Sydney and North Melbourne have played out a 94-all draw in Hobart, leaving the Giants' six points outside the AFL top eight.

Greater Western Sydney's final hopes are hanging by a thread after falling just short of a miraculous AFL comeback in a 14.10 (94) to 14.10 (94) draw with last-placed North Melbourne.

The Kangaroos held a 28-point lead heading into the final term on Sunday afternoon at Blundstone Area and were on track for an upset win.

But after a poor first three-quarters, the Giants mustered a late revival, with two Daniel Lloyd goals levelling scores with just over a minute to go.

Lloyd nailed a hand-off from long range to reduce the margin to six and then grabbed a pack mark to even it up.

He had a tough chance on the run to seal a win late but his kick went out of bounds.

Giants defender Adam Kennedy had an opportunity to kick a miracle score after the siren from outside 50m on the boundary following a North Melbourne turnover but it fell well short.

"They probably deserved the win more than us. It's always a hollow feeling, playing a draw," Giants coach Leon Cameron said.

"There's just too much of a gap between our best footy and our worst. As a young team, we need to close that.

"It doesn't matter who you play, you're going to get found out. That first three quarters we burned the ball, didn't play good enough defence."

The result leaves GWS six points outside the top eight. North Melbourne would also be disappointed after being in the box seat to clain a rare win.

"It's extremely disappointing but there was a lot to take away, the way we played for the majority of the game."

After leading 58-52 at the main break, the Kangaroos scored four unanswered goals in the third quarter and opened up the biggest margin of the match heading into the last term.

The Giants moved stand-in skipper Toby Greene into the middle early in the fourth quarter and slotted the first three majors of the term.

On return from a fractured shoulder, Greene picked up 16 disposals and a goal for the match.

"We've got to be really careful that we don't become too Toby-centic every time we go forward," Cameron said.

"His last quarter was phenomenal at the centre bounce. Wherever you put him, he's always going to create something."

The Giants' Josh Kelly, who slotted two goals including a stunner on the run to spark the late revival, was the top disposal-getter for the match with 39, followed by North Melbourne's Aaron Hall (35). 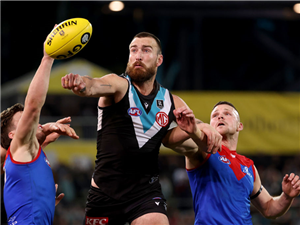