Geelong veteran Isaac Smith says the end of last Friday night's preliminary final loss to Melbourne was the most embarrassing 45 minutes of his AFL career.

Smarting from the most embarrassing experience of his great AFL career, veteran Isaac Smith is bullish that Geelong can still challenge for a premiership.

The Cats were awful last Friday night in Perth, losing their preliminary final to Melbourne by 83 points.

It begs the question whether Geelong, with their older list, need to change tack and have a reset.

But Smith, who starred this season after moving from Hawthorn, thinks the Cats can still be contenders.

"Our best footy was as good as anyone's in the comp, which is really disappointing and hard to come to terms with," the 32-year-old told RSN.

"Whether we just didn't time our run right or we had other things go against us we need to look at it and figure out what happened, because we still have the list that certainly can have a crack at it.

"We can't be up there for the whole year and then just fall off the edge of a cliff, I wouldn't have thought."

Smith was stunned by last week's results, saying he would have put his house on a Geelong-Port Adelaide grand final.

"But it was probably five minutes into the third quarter, when Maxy Gawn was kicking goals from 60 metres, out of the ruck, that I thought our night was probably done and dusted," the three-time Hawks premiership player said.

"I don't know if they were riding a huge wave of emotion and we didn't rock up, or what was going on, but that's one of the white-hottest teams I've played (against).

"I was pretty embarrassed, walking off the oval, and playing that last quarter and a half was probably the most embarrassing 45 minutes of football that I've played in my career."

It has emerged that some Geelong players were ill for Friday night's game, but Smith dismissed that as an excuse.

The on-baller said he was lucky, with the players who were sick staying at the other end of the team hotel.

"It certainly wasn't ideal and it certainly knocked a few boys for six, but we didn't think it had much a of play on the game - Melbourne were just too good," he said. 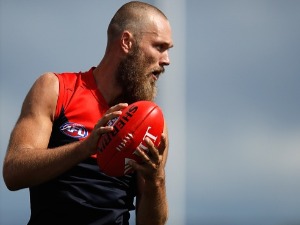