Seconds after Isabel Huntington clutched her right knee in agony, she had the grimly resigned look of someone who knew what it meant.

There was nothing cheerful about her smile as a Western Bulldogs trainer comforted the 22-year-old AFLW star.

Huntington, the Bulldogs and league officials all are hoping for good news, but the signs aren't great as they await the scan results.

One of the AFLW's brightest young talents has already undergone reconstructions on her right and left knees, as well as suffering a broken leg.

So when Huntington went to ground in the second quarter of Saturday night's 6.10 (46) to 3.4 (22) loss against Melbourne at Whitten Oval, she was far from the only person fearing the worst.

"She has a history of knee injuries and things like that, but we'll just have to wait and see and keep our fingers crossed."

After failing to take an overhead mark in the second term, Huntington tried to double back.

The right knee buckled as she tried to change direction and two trainers helped her as Huntington limped from the field.

Huntington won the 2020 Rising Star award and also made the All Australian team that year.

The key position player was the No.1 pick in the 2017 draft and is one of the AFLW's top young players.

Burke said Huntington would have plenty of support from teammates.

"Obviously there's a bunch of players who have just gotten to know Izzy and they love her," he said.

"Then there's a bunch of players who have been with her right from the start, through those sorts of (injury) issues.

"So there's different reasons for the sympathy, but obviously they'll gather around her and whatever comes of it, they'll support her to the hilt."

It was the worst of a bad bunch for the Bulldogs, who already have several players unavailable.

They started terribly, conceding three goals in the first quarter, and a third-quarter counterattack eventually petered out.

But Burke was pleased that they rallied after their poor start.

"The fact we were brave enough to say 'nup, that's not us, let's change it and play a different way', that pleased me." 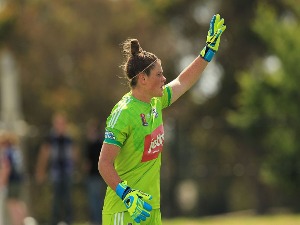