West Coast coach Adam Simpson says he will stay at the club as long as he is wanted as he plots a rebuild to get the Eagles back into contention.

Premiership coach Adam Simpson has declared he is in for the long haul at West Coast, squashing speculation linking him with a fairytale return to North Melbourne.

The bottom-placed Eagles appear set to endure a long and painful rebuild, and David Noble's struggles at North Melbourne have set the rumour mill into a spin.

Simpson is contracted to West Coast until the end of 2024.

But given he is a famous Shinboner who played 306 games for North Melbourne, there are already calls for Simpson to take over at the Kangaroos.

West Coast chief executive Trevor Nisbett has declared that the club are sticking with Simpson, and the 46-year-old coach moved quickly to squash any talk linking him with North Melbourne.

"I'm here for as long as the club wants me, and I'm actually excited about what we can do in the future," Simpson said ahead of Sunday's clash with Melbourne at Optus Stadium.

"Obviously it looks pretty dire at the moment, but that's all part of it - that's part of leading and being resilient.

"So (we need to) look to the future, develop as best we can, get a program in place that gets the best out of our younger players, and then see some improvement on field.

"That's our goal right now. The other stuff - that comes with the job."

West Coast sit on bottom of the ladder with a 1-7 record and a dismal percentage of 52.

The Eagles' task to topple the Demons has been made even tougher after Andrew Gaff (quad) and Shannon Hurn (calf) were ruled out after picking up injuries at training.

Rioli, who is visiting family in the Northern Territory, will miss another month, but Shuey is expected back next week.

Simpson is likely to give Yeo a stint in the WAFL after his season was affected by a calf injury and a heavy concussion.

His previous two years were plagued by osteitis pubis.

"Hopefully it's a moment in time for him," Simpson said.

"He's a two-time best and fairest winner, All-Australian premiership player. Him at his best, he's in the top bracket of the competition.

"We've just got to get him back to that."

Simpson said the club had moved on from the nightclub saga that resulted in seven players copping fines for breaking the team's guidelines.

"Obviously they're very remorseful. It was an error of judgement really," Simpson added.

"It was an eight-day break and they went out together, but it was a poor call by those players.

"They all apologised pretty much straight away, and we dealt with it and have moved on." 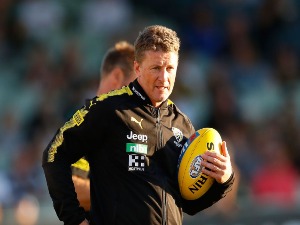