Socceroo Tom Rogic has bidden an emotional farewell to Celtic after finishing his nine trophy-laden years at the Scottish giants in triumphant style.

On a day of glory and celebrations for Celtic, there were only poignant tears from an old hero Tom Rogic.

The elegant Australian international midfielder was given a standing ovation from a full-house at Celtic Park on Saturday as he left the stage choked with emotion following nine trophy-laden years at the Scottish giants.

Brought off just after the hour during Celtic's celebratory 6-0 triumph over Motherwell on the day they picked up their Premiership trophy, the 29-year-old was left in tears by the warmth of the reception from 60,000 admirers in green.

"It's hard to put into words. The club's been an important part of my life and I've had an amazing time here," the Socceroo told Sky Sports on the Parkhead pitch after a man-of-the-match performance in his final game.

"I can't thank everyone enough and I got the perfect send-off today. it's emotional for me and my family.

"I'm fortunate that I've had many great moments here and been part of many successful teams and won a lot of trophies.

"I'll look back on amazing moments. It's a special place and I just hope the success continues and I'll be watching as a fan from now on."

"It wasn't one I took lightly, but I feel the timing is right," he said.

"Off the back of last season, this is enormous. It's a special season to go out on."

He said he wasn't sure where he'd be heading next. "Now isn't really the right time, I'll just reflect on the career I've had here.

"I am ready for a new challenge and a change of scene is something that will motivate me. I'll sit down with my agent in the coming weeks and discuss my options."

Under his old Socceroos' mentor Ange Postecoglou, who's had an amazing impact at Celtic in his first season there, Rogic cut a rejuvenated figure this season, even being selected in the Premiership team of the year.

Postecoglou, who held the trophy aloft with Rogic in the post-match celebrations, admitted he was very sad to see his protege leave, hailing the man from Canberra as "a top guy"who'd played a significant role in his success.

Tributes flooded in from the club's great and good too.

"What Tom Rogic brought to the club was class," Stiliyan Petrov, one of the club's most celebrated old boys, said.

"He was a different kind of player, who achieved not just on the field but off the field as well. He's a legend for this club - he'll be remembered as one of the best." 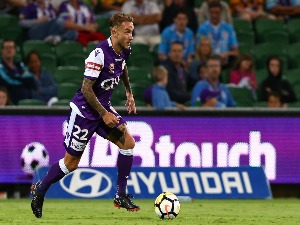