Australia have crushed Pakistan by 119 runs in their Under-19 Cricket World Cup quarter-final to advance to the last four of the tournament in the Caribbean.

Australia have stormed into the semi-finals of the Under-19 Cricket World Cup, with their top order setting up a dominant 119-run win over Pakistan.

A half-century from Teague Wyllie was the catalyst for Australia's innings of 7-276 in their quarter-final at Sir Vivian Richards Stadium in North Sound, Antigua and Barbuda.

Pakistan's run chase never got going and they were dismissed for just 157 in the 36th over, as wickets fell at regular intervals.

The result leaves Australia two wins away from their fourth title, and their first since Mitch Marsh led the country to junior success in 2010.

After being asked to bat first, Australia got off to a flyer with Wyllie and Campbell Kellaway providing the solid foundation before Corey Miller and captain Cooper Connolly contributed valuable runs.

Paceman William Salzmann was the chief destroyer with the ball as five different players took wickets to seal a comfortable passage to the last four.

Australia will face India or defending champions Bangladesh on Thursday morning (AEDT) for a place in the February 6 final.

Wyllie top-scored for Australia for the third time in four matches in the Caribbean, his 71 off 97 balls complemented by Kellaway's 47 as the openers put on 86 runs in 16.4 overs.

Miller (64) played his part in a 101-run partnership with Wyllie before Connolly chipped in with 33 and Salzmann cracked a rapid 25 to round out the innings.

West Australian Wyllie has scored 264 runs at an average of 132 in the Caribbean, with his outstanding form in four innings including an unbeaten century against Scotland in their final group game.

"When he walks to the crease and he plays a couple of shots, you just go: 'yeah, he's on'," Connolly said of Wyllie.

"You can just sit back and relax and hopefully someone bats with him and builds big partnerships.

"That's what we have done when we've won games, hopefully he can keep scoring some runs for us."

Australia's bowlers ensured the comprehensive win was never in doubt as scoreboard pressure proved too much for Pakistan to handle.

Salzmann took 3-37 from seven overs, including the final wicket to wrap up proceedings, while Tom Whitney (2-31) and Jack Sinfield (2-34) provided valuable support. 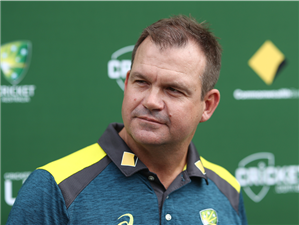