Captain Moises Henriques hit 73 from 48 balls as the Sydney Sixers recovered from 5-39 to post a 14-run win over the Hobart Hurricanes in Launceston.

A captain's knock from Moises Henriques has lifted the Sydney Sixers out of a hole and to an unlikely 14-run Big Bash League win over the Hobart Hurricanes.

Henriques hit 73 from 48 balls at University of Tasmania Stadium in Launceston on Wednesday night after his side were sent in and fell to 5-39 in the ninth over.

The 34-year-old's knock pushed the Sixers to 9-144, with the Hurricanes' chase falling short despite the best efforts of Peter Handscomb (47 from 31).

Hobart needed 23 off the final 12 deliveries but managed just eight, finishing at 8-130 as Sydney's England imports Chris Jordan (1-20) and Tom Curran (3-27) held their nerve with the ball.

After an unbeaten 76 in the Sixers' record-breaking BBL win over the Stars on Sunday, Henriques shared a crucial 62-run partnership with Curran (27 off 21 balls).

"This is a much more enjoyable win," said Henriques.

"When you get put under pressure, you want to see guys come out and perform and do it when the game's there in the balance.

"We were under pressure obviously with the bat and when they only needed 37 runs off four overs. We were able to combat both of those situations and find a way to get the result."

Henriques clawed back momentum when the Hurricanes turned to their part-timers in the middle overs, before falling in the final over to Nathan Ellis (2-34).

"Normally if we were only one or two down I'd try and take a few risks a bit earlier ... but at that stage the risks weren't worth taking," he said.

"I had to just cool my jets, try and build a partnership with someone and take the game a little bit deeper."

The Hurricanes got off to a sluggish start in reply, with opener D'Arcy Short soaking up 36 balls for his 21.

They fell to 5-78 in the 14th over and couldn't muster the required late blows against the reigning champions.

Jordan Silk was at his best in the field, snaffling two catches including a low effort to remove Wade, and also saving a six with a leaping tap-back.

The victory was a remarkable turnaround for the Sixers, who lost 4-6 in the space of 14 deliveries.

Ellis started the rot when he bowled in-form Josh Philippe (five) with a slower ball in the fourth over.

English import James Vince (13) joined him in the sheds when he was stumped off the first delivery from the part-time spin of David.

Tom Rogers, who finished with Hobart's best figures of 3-28, then got rid of Daniel Hughes (three) and Silk (zero) cheaply. 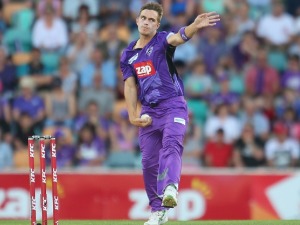