Few could have predicted the fashion in which Pat Cummins' coronation as Australia's 47th men's Test captain would be carried out, for several reasons.

There were no hugs or handshakes from parents or bigwigs, and similar mixed feelings to those experienced by Tim Paine in South Africa as Australia awkwardly ushered in its next men's Test captain.

The occasion is generally one for celebration; in 1994, Mark Taylor ticked requisite boxes then headed to a Woollahra pub for a beer with Australian Cricket Board heavies Alan Crompton and Graham Halbish.

Paine's coronation came in the bowels of a Johannesburg hotel as a small piece of sandpaper cast a pall over his euphoria, the hasty process and a Test squad reeling from one of Australian cricket's darkest hour.

It felt more funeral than graduation as Paine tried to keep focus on the fourth Test of that ill-fated series, knowing it was all but impossible for obvious reasons.

The parallels on Friday, when players learned the identity of their new skipper while absorbing unexpected news that Paine would not join the squad for the Ashes, were hard to escape.

Pat Cummins - or Patrick, as vice-captain Steve Smith repeatedly referred to him as the two sat side by side navigating a 35-minute media conference via Zoom - spoke well and sensibly.

But there were multiple elephants in the virtual room as CA chief executive Nick Hockley and chair Richard Freudenstein watched on, fielding no questions as Cummins spoke of Paine's "tough time".

Hockley and Freudenstein, plunged into crisis management some eight days earlier then pilloried by several parties, could be excused for wondering how the hell it went to pieces after Australia's Twenty20 World Cup squad delivered a feel-good triumph and Ashes momentum.

That question may go unanswered, at least for some time.

It hinges on being able to know more about CA's opaque response to Paine's misdemeanour in 2017.

Likewise the conversations that prompted Cricket Tasmania chair Andrew Gaggin to lash CA's "appalling" treatment of the wicketkeeper after it became clear Paine's sexts would enter the public domain.

Hockley and Freudenstein were part of the five-person panel that nominated Cummins, with chief selector George Bailey also at the e-table as he supported friend and business partner Paine in person.

Quarantine restrictions meant there was no scope for fresh photos on Friday, such as those snapped of Smith and David Warner cheerily tea-cup toasting their promotion in the 2015 Ashes as Michael Clarke shuffled into retirement.

Cummins, who reunited with fiancee Becky and seven-week-old son Albie in the Test squad's quarantine base on the Gold Coast, could see the upside of being in lockdown for his crowning moment.

"In some ways it's been quite nice to be a bit removed from everything," Cummins said.

"The guys have been great around here ... really supportive.

"Mum and dad were super excited, there was a few tears.

"Becky's priorities are probably on our seven-week-old baby, she was impressed for about two minutes then back to keeping our baby alive.

"It's a really special time, everyone's happy and proud." 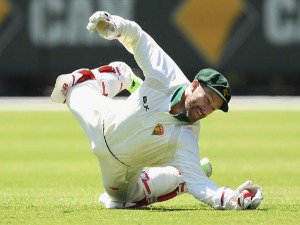