Australia have surged from 12 points down to beat Samoa at the Oceania rugby sevens tournament in Fiji to guarantee their spot at next year's Olympics.

The relief on captain Lewis Holland's face was plain to see as he fell on a ball to score the try that finally secured Australia's men's rugby sevens Olympic berth.

Australia trailed Samoa 12-0 at halftime in Saturday's Olympic qualifier at the Oceania titles in Suva, but remained calm as the rain poured down to prevail 19-12.

A loss would have consigned Australia to a last-ditch qualifying tournament on the eve of the Games.

Instead Holland, who charged down a kick to score the match-winner at the death, can begin preparations for a second Olympic campaign.

"It's a bit of a relief; the last three months have been building towards this moment because we didn't get there through the world series (after finishing seventh)," he said.

"We were prepared for that game, prepared for being 12 down, 19 down. We held our composure and it showed that if you do, things tend to go your way."

Samoa played with just six men for a bulk of the first half following a yellow card for a high tackle, but still scored twice as Australia struggled to hold the ball and create a physical presence.

Henry Hutchison was a decisive influence after coming off the bench, while Holland showed his poise as they scored 19 unanswered points.

"There was a lot of pressure building up on this one game and the rain comes pouring down.

"But preparation brings confidence and you create your own luck."

Having already qualified for Tokyo, defending world and Olympic champions Fiji had competed in a separate side of the draw with New Zealand.

Australia earned the right to meet the hosts in the tournament's final game though and sent a statement with a 22-7 win that underlined their potential.

The men's world series will begin in Dubai in December, with 10 legs before teams play for gold in Japan.

Australia's women will also return home with confidence, beating New Zealand twice in two days on their way to the title as they fine-tune preparations for their gold medal defence. 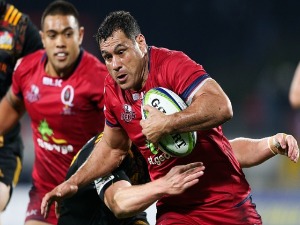