Maria Sharapova's match at Kooyong has been called off late in the second set with the umpire announcing smoke was affecting the players.

Former world No.1 Maria Sharapova says smoke was behind the decision to call off her Kooyong Classic match late in the second set when she started to succumb to the tough conditions.

Taking on German Laura Siegemund in the Australian Open warm-up exhibition tournament with heavy smoke blanketing Melbourne, the players and officials decided to stop play at 5-5 in the second set.

Sharapova said she felt a cough coming on as the match stretched past two hours with temperatures on court around 40 degrees.

"I started feeling a cough coming toward the end of the second set but I've been sick for a few weeks so I thought that had something to do with it," Sharapova told SBS after the match.

"But then I heard Laura speak to the umpire and she said she was struggling with it as well.

"We were out there for over two hours so from a health stand point it's the right call from officials."

On the back of a tough run with injuries, Sharapova's ranking has slipped to world 145.

She won the Australian Open in 2008 and has reached the final a further three times.

Despite the decision, Bulgarian Grigor Dimitrov and Croatian Borna Coric still took to the Kooyong court for the second scheduled match. 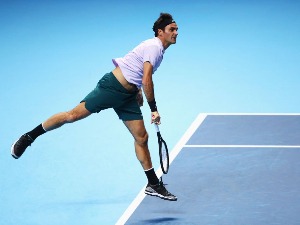 Tennis
Updated 4 hours ago
Federer through to Open second round
Australian Open day one snapshot
Key matches on day two at the Aussie Open
Dusty-mania would be too much: Serena
Gauff downs Venus in Wimbledon repeat
Retiring Wozniacki eyes Open fairytale
Shapovalov bounced out of Aussie Open
Serena powers into Open second round
Kyrgios hoping to keep it positive
Tough start for locals at Australian Open