Australia reached several new heights in their 10-wicket flogging of India in Mumbai, in the first ODI of their three-match series.

* The 10-wicket margin was Australia's biggest in a one-day international in India, and only the second time the hosts have been beaten so badly at home.

* David Warner and Aaron Finch's 258-run opening partnership was the biggest for any wicket against India, of any team.

* The stand was the highest unbeaten partnership for any wicket by an Australian pair, and the third biggest from any country that went unbroken.

* Warner became the fastest Australian to 5000 one-day international runs, and the fourth fastest worldwide. Only Hashim Amla, Viv Richards and Virat Kohli have got their faster.

* It marked just the fifth time Australia's two openers have scored centuries in the same innings of a one-day international.

* Warner's 18th ODI century took him equal-second on the all-time list for Australians, equal with Mark Waugh and behind only Ricky Ponting (29).

* Australia's effort to reach the target in 37.4 overs was the fifth quickest successful chase against India in their home conditions. 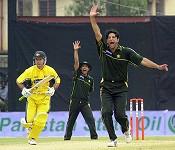