Alex Kountouris knows that mistakes are inevitable as stars adjust to Cricket Australia's COVID-19 training protocols, while Tim Paine has backed his team to return to play on short notice if required.

CA's nationally-contracted players returned from leave this week, still unsure when their next match will be as the International Cricket Council (ICC) plots a path through the pandemic.

The focus of Paine and Meg Lanning's sides is currently on pre-season fitness work, but they will soon be back in the nets as state squads train under strict guidelines.

A ban on using saliva to shine the ball, which CA's head of sports science Kountouris suggested could potentially become a permanent part of the sport, is among the coronavirus-related law changes the ICC has flagged.

CA's guidelines, which along with state-government restrictions will shape players' return to training, cover that issue and many more.

"It's specific around no sharing of equipment," Kountouris told reporters.

"It's specific around the need to clean things that are shared (facilities).

"I imagine we are going to take a common-sense approach and understand that people make mistakes and things are not going to be perfect."

Kountouris, who revealed CA will look at possibly disinfecting the ball during games this summer, conceded some habits will be hard for players to break.

Justin Langer's team would ordinarily be in Brisbane preparing for a Test tour of Bangladesh, but that trip has been indefinitely postponed.

Australia's next series is likely to be a limited-overs tour of England in September, although that is yet to be locked in.

Test skipper Paine is confident that teammates will adapt to any sort of lead up, no matter how short, that precedes their comeback match.

"You're not going to lose it in a period of a month or two," Paine said on a BBC Test Match Special podcast.

"The guys will be ready to go reasonably quickly if needed.

"It's more a mental type of thing (than physical) ... you play so much now, most guys are ready to go pretty much all the time."

"I can't wait to jump on a plane and start playing international cricket again." 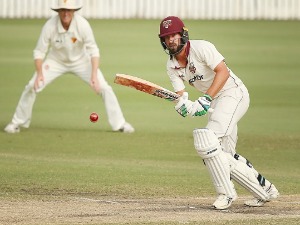