Australia's cricketers won't shine the ball with sweat from their head, neck or face in the limited-overs series in England.

Australia's bowlers won't be able to use sweat from the face, neck or head to shine the ball in the limited-overs series against England under the team's new biosecurity laws.

Saliva has been prohibited from use since cricket's return from the COVID-19 shutdown for health reasons, but until now all sweat has remained legal.

However, Australia's policy based on medical advice is that the use of sweat should also be limited, and have trained that way in the lead up to the series.

Sweat from the torso is still permissible, with perspiration from the back now the most likely ally to shine the ball.

Under ICC rules England will still be able to use sweat from any part of the body, including the head.

"It was spoken about in the team meeting that there are slightly altered guidelines from what people may have seen from the previous England series here," Mitchell Starc said.

"You can't use sweat from around the face, neck or head and you obviously can't use saliva.

"It might look a bit interesting if bowlers are using sweat off their back, can't use it off your arms either I don't think.

"It's probably not something that's too relevant in white-ball cricket, once that new ball starts to go you are trying to keep it dry anyway."

Where it will matter though is in red-ball cricket.

Australia don't play a Test until the home summer against Afghanistan, while the Sheffield Shield is expected to start well before then.

While each white ball doesn't age beyond its 25 overs in one-day cricket, the ability to maintain and shine one side of the red ball throughout its 80-over life is crucial.

"It's more of a relevant question to red-ball cricket and wanting to look after that ball a lot longer and hopefully swinging it around," Starc said.

"One for the red-ball team to talk about when we get to that point. But at the moment we're pretty good."

Meanwhile Australia are still becoming accustomed to other challenges surrounding playing during the COVID-19 era.

Twenty-one players were selected in the squad for the three T20s and ODIs, while extended numbers are expected to be picked in bubbles through the summer.

"You have depth charts any way in terms of who you see coming through.

"But very much specifically you have to go down the rabbit hole of planning for three or four scenarios, and having very much like-for-like replacements so whatever situation does arrive that your team balance isn't compromised." 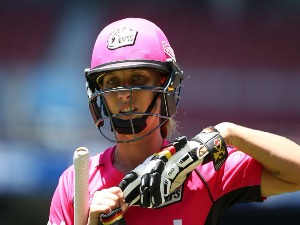