Cricket Australia is close to finalising an international schedule for 2020-21 as it waits to see whether a payment from its free-to-air broadcaster arrives.

The one-off Test between Australia and Afghanistan is in extreme doubt as the stakes increase in Cricket Australia's stand-off with its disgruntled free-to-air broadcaster.

The match between Australia and Afghanistan, currently slated to be played in Perth on November 21-25, has long been at risk of being scrapped because of the COVID-19 pandemic.

CA is yet to officially give up hope of staging the Test, which would have been a far easier logistical exercise if Afghanistan were already in Australia for the Twenty20 World Cup as planned.

But, with arrangements yet to be confirmed and broadcasters desperate for some clarity on dates, it is growing increasingly likely the game will be left off the imminent schedule update.

CA, which is waiting on government clearances before signing off on its updated 2020-21 fixtures, has already had to amend its program by postponing home series against Zimbabwe and West Indies.

The clash with Afghanistan shaped as a timely tune-up for Australia's four-Test series against India, but a proposed Australia-Australia A contest could double as warm-up game and selection trial for the first match against Virat Kohli's side.

Meanwhile, Tuesday shapes as the first of several key deadlines in the escalating spat between CA and Seven West Media.

The network is due to pay $25 million on Tuesday, its next instalment in a six-year deal worth $450 million.

Barring a last-minute breakthrough in negotiations, Seven is expected to withhold the payment or submit part payment as it waits for Australian cricket's governing body to respond to last week's breach-of-contract letter.

Such a development would likely strain the frosty relationship further on the eve of the international season, which starts with a trans-Tasman women's clash in Brisbane on September 26.

Seven has made it clear it will fulfil its contractual obligations to broadcast that series, even if its stoush with CA heads to mediation and arbitration.

Seven and Foxtel were recently sent draft programs for the summer, including some that did not feature the Afghanistan Test, and asked to nominate a preference.

The Afghanistan contest had been pencilled in for the second week of December, with the only question at that stage being whether it will be a day-night Test.

But the hardline stance of Western Australia's government has forced CA back to the drawing board.

Afghanistan would need to quarantine for a fortnight - and likely want at least one tour game - prior to the proposed one-off Test.

Star spinner Rashid Khan is among the minnows' stars taking part in the Indian Premier League in the UAE, where many of Australia's best players will head after the third ODI against England. 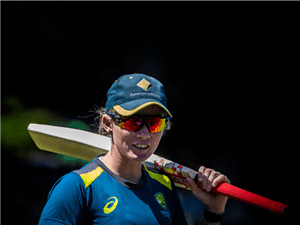