Former Australian quick Brett Lee has bravely fronted up for a commentary appearance on Indian television only hours after spending 30 minutes trying to save Dean Jones' life.

Jones, one of Australia's most renowned cricketers, died of a heart attack on Thursday, aged 59.

Lee, who played 76 Tests and 221 ODIs for his country, attempted CPR on Jones for about 30 minutes, but the Australian batting great could be not revived.

The pair were in Mumbai to commentate on the Indian Premier League for Star Sports India.

Lee performed his commentary duties, alongside former New Zealand allrounder Scott Styris, who was also a great friend of Jones.

"(Jones) would have wanted us to be here tonight. It's Deano's dugout tonight," Lee said.

"He is an absolute legend. Obviously to his family and friends we send our condolences.

"It's a real, real tough day for everyone, not only for his close mates at home, but the whole cricketing world in general."

Former Australian opener Michael Slater, who is in Dubai for the IPL, said Lee contacted him straight after Jones' death.

"Brett was beside himself and just wanting some friend support because he had worked on Deano for half an hour before the ambos came," Slater told Seven Network.

"We were preparing to get to the ground for today's coverage, and I've got to say it's one of the hardest broadcasts I've ever had to do.

"But we were all doing it for Deano today."

Cricket Australian chairman Earl Eddings said his thoughts were with everyone involved.

"(We have to be) looking out for Brett Lee, how we can support Brett, who was obviously very traumatised by what happened," Eddings told Nine Network.

"Really just getting the cricketing family together and support Dean's family but also Brett."

Australian coach Justin Langer has checked in with Lee, saying he could not imagine what his former Test teammate - and "little brother" - is going through. 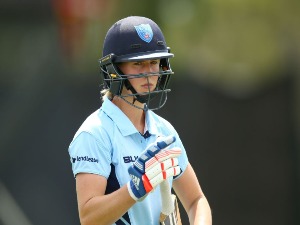