Paine took advantage of the good wicket at Karen Rolton Oval to strike an unbeaten 111 before declaring his side's innings closed at 8-493 on Wednesday.

SA were 2-93 at stumps on the penultimate day, still needing 205 runs to make the Tigers bat again.

It had been 13 years between Paine's first two state centuries but the 35-year-old only had to wait 12 months for his third in a nice tune-up for the India Test series starting in December.

Looking in fine touch behind the stumps with a flying catch on day one against SA and a tidy first-up match against Queensland, Paine hadn't been nearly as impressive with the bat.

But after his two failures against the Bulls he ran roughshod over a tiring Redbacks attack on day three, bringing up his hundred from a boundary with a sweetly timed hook off Kane Richardson (2-79).

Paine finished unbeaten with 12 boundaries and a six from 210 balls faced.

He shared a 153-run partnership with Jake Doran (112), who struck just the second century of his five-year Shield career.

Doran said it was great batting with Paine, who always led by example.

"He's a class player. The way he went about it today - every single time he hit the ball he said he was no good out there - but he struck it pretty well," he said.

"I think how he batted today was perfect."

As for Paine at one stage getting struck on the elbow by Wes Agar, Doran seemed mildly amused that it could be of any concern.

"Fine - just a little bit of mayo on that I reckon," Doran said.

Chadd Sayers was the pick of the SA bowlers with a miserly 3-27 from his 29 overs.

Veteran Peter Siddle (1-26) then had Brad Davis bowled for 19, leaving SA with it all to do to save the match.

Incumbent Test No.6 Travis Head dislocated his little finger diving for a ball on Wednesday but came out to bat and finished the day unbeaten on 17 alongside Henry Hunt (44 no). 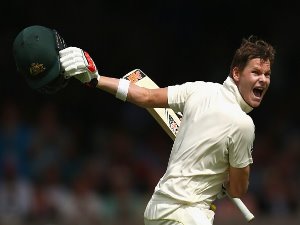