Alex Carey can't wait for Australia's ODI series opener against India on Friday, which comes a day after his 14-day quarantine period ends.

Australia's cricketers are straining to be let out of quarantine for the looming one-day series against India, 'keeper-batsman Alex Carey says.

Carey and the Australians who played in the IPL have spent the past 11 days in quarantine in Sydney, as has India's squad.

The cricketers are allowed out of their rooms for about three hours a day to train before the ODI series-opener in Sydney on Friday, the day after their 14-day quarantine finishes.

"We have got times between us and India so we train for two or three hours a day and then once we're back in our bedrooms, we're not allowed to leave them," Carey told reporters on Monday.

"On the bus to training or back in the bedroom, it's a pretty strict lockdown here in NSW.

"But we are lucky enough that they have allowed us still to go out and train.

"The preparation actually has been really good ... (it) feels pretty normal when we are at training.

"It's just when you get back to your bedroom, you're locked in this little space for the remainder of the day.

"So once the guys do get out and train, the standard is really high. Everyone is really keen to get some fresh air."

Carey went to the IPL after featuring in Australia's most recent ODI series in England in August - he has seen his wife and two-year-old boy since.

"I'm really excited to hopefully join up with my family in about a week's time, they will be able to enter the (biosecurity) bubble," he said.

Carey has been selected in the Australia A squad to play India in a pair of three-day games leading into the first Test starting on December 17 in Adelaide.

"I'm really excited for the opportunity to play some longer format cricket," he said.

"The experience I am getting at international level in one-day and T20 cricket competitions around the world - it's still cricket, it's still batting, it's still wicketkeeping, so I think I am improving my game.

"Hopefully my skills continue to improve and if an opportunity does come up to represent my country in the longer format, then I will hopefully feel prepared and ready to do so.

"It's still a long way off. (Test captain Tim) Paine is obviously doing a great job behind the stumps and leading that group." 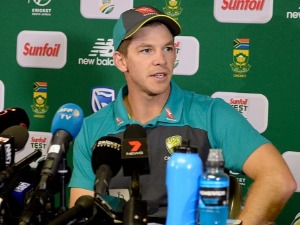