Usman Khawaja has guided the Queensland Bulls to a four-wicket win over Tasmania in the one-day cup, his second match-winning knock in three days.

Usman Khawaja has starred for Queensland for the second time in three days, setting up a four-wicket win over Tasmania in the one-day cup.

Fresh off an unbeaten 115 in the Bulls' final-day Sheffield Shield victory over the Tigers on Saturday, the 34-year-old hit 93 against the same opponent on Monday.

Despite some late jitters at Bellerive Oval, the Bulls ran down Tasmania's total of 237 with 14 balls to spare.

Khawaja looked on track for his 15th 'List A' century until he edged Nathan Ellis behind in the 42nd over.

But it was another composed knock from the in-form Khawaja, who boasts averages of more than 40 at Test and ODI level.

The victory was set up by quick Billy Stanlake, who ran through the Tigers' top four to finish with 4-24 from his 10 overs.

Bowling second change, Stanlake ended a promising start by the Tigers, who were nicely placed at 0-55 in the ninth over.

Among his victims was Test skipper Tim Paine, who opened the batting after Tasmania were sent in, who fell for 28.

Jordan Silk held the Tigers' innings together with 77 from 88 balls to continue his strong white-ball form this summer.

It was the perfect start for Queensland to the re-scheduled one-day cup, which will end with a final on April 11. 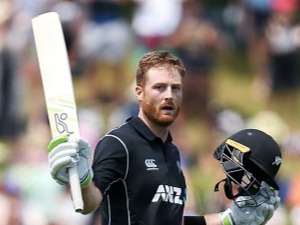