Handscomb stars for Victoria in the Shield

Thirteen wickets fell on the opening day of the first Sheffield Shield match at the MCG since 2019, with Victoria going to stumps at 3-70 after Tasmania's 188.

Victoria captain Peter Handscomb has backed up his decision to bowl first against Tasmania, keeping his state out of serious trouble in the Sheffield Shield match.

The home team went to stumps at 3-70 on day one after earlier on Friday skittling the Tigers for 188 on a bowler-friendly MCG pitch.

Tasmania hit back, through stand-in skipper Jackson Bird (2-23), when they fielded.

But Handscomb continued the good form that resulted in a badly needed century against NSW last week with a free-flowing unbeaten 52.

Quick Scott Boland survived after joining Handscomb late in the day as nightwatchman after Bird dismissed Matt Short for a duck to add to his earlier lbw removal of Nic Maddinson for two.

Tasmania's fill-in wicketkeeper Jake Doran, who took the gloves in the absence of the unwell Tim Paine, fought hard by top-scoring with 52, but fell victim to a terrific run-out from Maddinson.

The Tigers' pre-match plans were thrown into chaos when Paine, Australia's Test captain, woke up ill and was forced to withdraw from the must-win game due to COVID-19 protocols.

Wanting to add in a batsman, Tasmania called former Australia Test No.3 Alex Doolan to make an urgent dash from Hobart on Friday morning and fly into the Victorian capital.

Doolan arrived at the MCG after the start of the match, but as wickets tumbled he entered the crease after lunch at 4-86.

But there would be no dramatic heroics from the 35-year-old, who was bowled by Perry for 12.

The Vics sit fourth on the Shield table with one win and three draws this season, while Tasmania are yet to produce an outright victory. 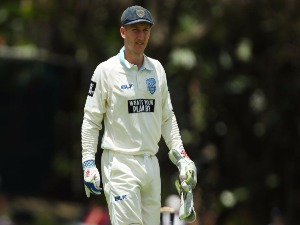