Star paceman Mitchel Starc understands why rotation will be on selectors' minds during a busy six-Test summer in Australia.

Australia's quicks know that rotation will be on selectors' radar during a six-Test summer headlined by the Ashes.

Mitchell Starc, Pat Cummins and Josh Hazlewood played all four Tests against India in 2020-21, which culminated in a shock Gabba defeat and series loss.

The star-studded yet fatigued attack failed to bowl India out at the end of both the third and fourth Tests.

It prompted chairman of selectors Trevor Hohns to call for closer monitoring of weary fast bowlers this summer, when a one-off Test against Afghanistan and five Tests against England will be crammed into a tick over seven weeks.

Peter Siddle last week urged Australia to rotate their pacemen against England, highlighting how he, Starc, Cummins, Hazlewood and James Pattinson shared the load to help retain the urn in England during 2019.

Starc, who will spearhead Australia's attack in their ODI series opener against West Indies in Barbados on Wednesday (AEST), says the topic is "certainly one that's on the discussion table for staff and the selectors".

"No doubt players will want to play every game. So that's a hard one, to take the ball out of someone's hands," the left-armer told reporters.

"But certainly the mindset of the fast bowlers is wanting to win the series.

"Something that we did in England was have a squad of bowlers. Pat was the only one who played that whole (2019) series. Whether it's through match-ups, conditions or the physical capacity of guys to get through series."

Starc's immediate focus is on bouncing back from a 4-1 T20 series loss to West indies.

The lopsided defeat has made the absence of Cummins, David Warner, Glenn Maxwell and other stars - who opted to skip the trip because of biosecurity bubble fatigue - all the more glaring.

"I've got my own opinions I'll keep to myself," Starc said, having turned down the riches on offer at the Indian Premier League since 2015 because he wants to spend time with family.

"Each of the those guys are going to have different situations that determine their decision.

"Ultimately, we're here with a strong group ... we're still looking to win series and we've got some things to improve on from the T20s."

Captain Aaron Finch remains in doubt for the first ODI because of a knee injury. 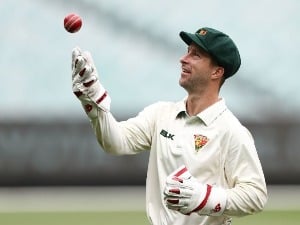