Darcie Brown says she and fellow inexperienced members of Australia's young pace attack are ready to step up in the absence of spearhead Megan Schutt.

Teenage tearaway Darcie Brown is confident Australia's young attack will step up in coming weeks as they prepare to confront India without spearhead Megan Schutt.

Schutt, who last month celebrated the birth of her first child with wife Jess, and injured spinner Jess Jonassen are missing the multi-format series that begins next week in Mackay.

As a veteran of 142 matches for Australia, Schutt will be undeniably hard to replace.

But the squad's inexperienced fast bowlers, who trained together for the first time on Monday after players from Sydney and Melbourne were released from hotel quarantine in Brisbane, are ready to embrace the challenge.

The 18-year-old Brown made her international debut earlier this year in New Zealand, while fellow quicks Stella Campbell and Maitlan Brown are both uncapped.

Young guns Tayla Vlaeminck, who was ruled out of the 2020 Twenty20 World Cup on the eve of the tournament because a foot injury, and Annabel Sutherland are also new-ball options for the hosts.

"Everyone is keen to show what they've got," Darcie Brown said.

"It is sad that Schutter isn't there but it's going to give a fair few opportunities to everyone else, which is exciting - and she really wants to see everyone play well.

"I think there will be lots of opportunities, with girls coming our of quarantine, management of workloads and stuff like that.

"I've still got lots to learn, I'll be asking a few questions."

The carrot of World Cup selection is in front of Brown and teammates, who next week will seek to continue Australia's record 24-game ODI winning streak.

Australia face India and England in a busy home summer, with captain Meg Lanning and coach Matthew Mott keen to shore up plans for their one-day World Cup campaign that begins in March.

"Everyone wants to be in that squad," Brown said, having received her cap from Schutt in New Zealand.

"For now it's about worrying about this India series, trying to enjoy it as much as I can."

Brown added the mentorship of Schutt and former Test quick Ryan Harris, who served as the squad's bowling coach earlier this year, had helped her become a more consistent bowler. 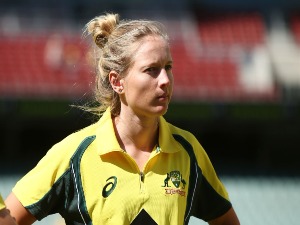