Nine years after turning James Graham into the NRL's biggest ball player, Des Hasler is now running with five small men as playmakers at Manly in 2021.

Nine years after turning James Graham into the biggest ball distributor in the NRL in his first year at Canterbury Hasler is at it again.

Only this time it's in reverse, with Hasler switching from a reliance on big men ball-playing to banking on extra playmakers in the new attacking era.

At almost any given time in Friday night's must-win semi-final against the Sydney Roosters, Manly will have up to five natural halves on the field.

Kieran Foran and Daly Cherry-Evans at No.6 and No.7, Lachlan Croker at hooker, Josh Schuster in the back row and Dylan Walker as a roving middle.

That's a list that doesn't include one of the game's best ball-playing fullbacks in Tom Trbojevic, or hooker-turned-second-rower Karl Lawton.

"They're all playing that well they'd probably put up arguments that they're (forwards) and not halves anymore," Jake Trbojevic said.

Once derided for a perceived inability to adapt Canterbury's attack in his late years at the Bulldogs, Hasler has embraced change more than anyone else in the Peter V'landys set-restart era.

Manly ranked 11th for attack last season and were the second-worst in the competition with ball in hand over the opening month of this year.

However, with Tom Trbojevic's return from injury and the extra playmakers helping unleash him, Manly scored more points than any other team in the past 20 rounds of the regular season.

It shouldn't be overlooked that in the great debate over who produced the greatest season, Hasler was the man that unlocked Ben Barba in 2012 and oversaw Trbojevic in 2021.

"What he does really well Des is he figures out what he's got and he designs his game plan to suit that," Dene Halatau, who played under Hasler at the Bulldogs in 2012, told AAP.

"Every coach does that but he exploits it really well.

"He did that with us in 2012. He got there and he was like 'I've got all these guys that have this skill set.

"'How do I design a game plan where they can use what they've got in the best way possible to execute the game plan?'

"The style of game that needs to be played now is different to the one nine years ago.

"But it's about understanding where the pieces fit."

Hasler's attacking shift was as much planned as it was evolutionary.

Struck by an injury crisis in the second row early in the year, Schuster found himself on the left edge.

As the NRL built towards its highest-scoring year in more than a decade and Manly recovered from their horror 0-4 start it was clear that the change worked.

While Hasler banked on Graham's ability to go deep into the line, Sam Kasiano's soft hands and four forwards on the bench at Canterbury, nimble five-eighth Schuster has become his second-rower at Manly.

Encouraged to learn to defend like a No.12, Schuster still acts like he has a No.6 on his back in attack.

"It's not really any different to be honest," Schuster said.

"I am a natural ball-runner. I like playing attacking footy obviously."

"We love our attacking footy and we definitely can play from anywhere," Schuster said.

"That plays a big part in my game as well."

Croker has learned when to kick and run out of dummy-half, while Walker is busting more tackles per minute this year coming off the bench.

"I just let them tell me what to do and orchestrate the whole game.

"Sometimes all I have to do is push up next to them and there is either a good opportunity for me to score a try or make the linebreak."

Again, it's been done in stark contrast to Hasler's time at the Bulldogs.

"He was always really big on field positions," Halatau said.

"We get to this field position because it gives us an overlap or there will be numbers here.

"(But) they've got licences to play what they see.

"And with that you have to break structure because you are going to end up on a different side of the field.

"So Des has definitely relaxed the structure side of things, if they see something they play it." 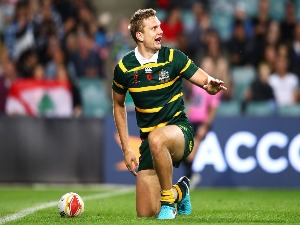